In economic literature  the term “dollarization ” means use of  foreign currency (not necessary the US dollar)  for one or more purpose – savings, measuring of value and purchase goods and services. Dollarization has spread in many countries of transition economy which began market restructuring and have a forming shadow sector, usually criminal and corrupt, which uses in mainly foreign currency in its “illegal business” . Nonetheless, root causes of displacement  of national currency by foreign currency are not associated with the nature and scope of shadow economy, but rather with mood of economic agents relatively of monetary policy by pursued authorities. Main triggers of dollarization are the intense inflation and devaluation process. Certain impact is made also by such external economic indicators as foreign trade turnover, exports, influx of foreign capital that allowing determinate approximately volume of foreign currency offer on the domestic market. And for a sake of completeness we should take into account influence of real interest rate on deposits in national currency because dollarization in largely is a “portfolio” decision.

In context of Belarus this phenomenon is sustained and obvious. Only slightly it differs from year to year. So, gradual recovery of the Belarusian economy after collapse of the USSR set at the first half of 2000s trend on reduction of dollarization with subsequent in 2007-2009 its “leveling”. With beginning of the global financial crisis and  especially after devaluation in 2011 the theme was updated and since then orientation to US dollar  is  inherent companion of economic life of the country. How much and what function inferior foreign currency Belarusian ruble? This is key issue and the answer on its very important.

Obstacle for the accurate calculation of the level of the dollarization of payments is the lack of reliable and credible data about of the volumes of foreign currency cash circulating in the country; approximate volume of the foreign currency cash can be “measure” of the indicators of activity of broad money. 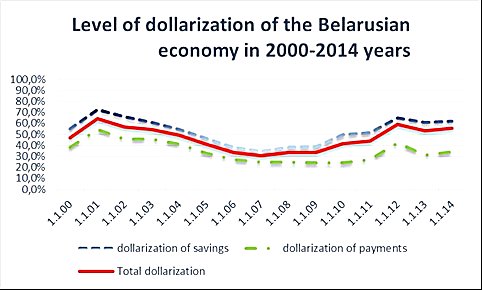 Level of dollarisation of Belarus economy

Well and since the legislator restricts the use on the territory of Belarus foreign currency for sales and purchases of goods and services (carte blanche in this case only have by small number of companies which has such right by National Bank) dollarization of payments  apparently there is a or to maintain the shadow sector or in the “accumulation of gold” on the hand and under the mattress (which is more likely). And this is an indirect indicator of trust in the national banking system. From the graph can also see that on the dynamics of dollarization influence crises (2009 and 2011). By the way, in one of the articles of the printed edition of the National Bank “Bank Bulletin” is mentioned about highly dollarization states in which the ratio of foreign currency deposits to M2 aggregate exceed 30%. If to look the statics of the same National Bank the Belarusian reality must looks terrible for economics authorities (see Table).

However, even without figures and graphs obvious dollarization of Belarusian economy, characterized by significant presence of foreign currency in assets of citizens and corporate sector.

The answer to the question “why? ” – also obvious. In a period of economic shocks 90s, which well-known rampant hyperinflation “green foreigner” has became the basis of confidence for Belarusians in the future. Since then on the mental level of consumption and savings behavior “pushing” to the dollar calculation. Slogans of “salary in 100-300-500-1000 dollars” form the appropriate expectations and comparisons. Macroeconomic policy of 2000s led to what today is people are trying not to have on hand the amount of Belarusian rubles exceeding their monthly expenses.

The monetary sovereignty, and not only

Like so many economic phenomena, dollarization have obverse and reverse with positive and negative consequences for the institute of independent state.   Thoughts of economist about the benefits consider process are based on what is full dollarization helps to stabilize the growth of prices in the economy at the level of 3-5% per year (this is especially actual for countries with double-digit inflation).

There is also an opinion that the positive effects of full dollarization is also reflected in the cost reduction of financial resources for the economy. At the same time important to emphasize that precedents of some Latin American “countries ” show that simultaneous and complete unification of interest rate and inflation in the recipient country foreign currency with the issue country does not occur. More serious motive of conscious dollarization appears in strengthening the integration process with the country whose currency “borrowing”. In this case between two countries are intensifying trade and capital flows that gives life economic activity and as a whole leads to increase economic growth.

However, the negative effects of dollarization look more impressive. One of the counter-arguments – the loss of Central Bank opportunity to influence on the national economy by monetary instruments (interest rate, refinancing banks and etc.) in order to overcome the internal/ external shocks. Switching at the foreign currency excludes the independent of emission or withdrawal of money and influence on their proposal in the economy. Greatly increases the role of foreign economic activity at that that  the development receive mainly those activities that find sale goods and services on foreign markets while many strategic sectors oriented to domestic demand will stagnate. Authorities also not be able to take advantage of the so-called inflation tax (“seigniorage”) obtained as a result of emission money and range in size from 0,75% of GDP in developed states up to 5% of GDP countries moderate inflation. Generally speaking dollarized country will loses ability to pursue an independent monetary and currency policy and in many cases the macroeconomic policy which in its turn restricts political independence of the state.

Belarusian authorities running in 2009 the program of dedollarization all else being equal circumstances deserve approval because is designed to strengthen economic and political sovereignty. But good intentions undermined by devaluation of the ruble which repeated recent years with alarming regularity.  Restrictions of lending on foreign currency and high interest rates on ruble deposits as a measure of dedollarization have given at the output crazy rates on ruble loans. This is turn affected the profitability of the business that uses credit ruble per inflationary expecting inflationary adjustment of its value.

The authorities statements on early 2015 about the set of measures to dedollarization and increasing confidence to national currency is no perceived as an effective program. The intentions maximally limit payments in foreign currency on the territory of Belarus and  decouple the customs duties, rents and other fees from the peg to euro-dollar looks more like a struggle with consequences  rather than the root causes of displacement ruble.

National Bank now reduces the amount of money in circulation thereby reducing inflationary pressures and creating a shortage of ruble liquidity. For reducing demand for the foreign currency again used of increasing the profitability of ruble deposits up to 40-50% per annum. And this is somewhat discordant with the statement of National Bank about struggle against inflation and the growth of prices – one way or another this money knocking at the door. On this background as well as on the background of the has increased cost of resources for Belarus on international capital markets sounded thoughts  and recommendations for people invest in stocks and bonds – are less expensive sources of money for the treasury and tools of their “binding”.

Plans to ensure price stability to be welcomed if it will be achieved mainly by reducing inflation and tighter monetary policy rather than administrative “no” increased prices and imports. In general the credibility of the economic powers exist when the regulator says that does and does that says. Reduce dollarization in circumstances when

“slippery run” will not turn not undermine business or people. Given the political situation the firs is more likely. Inefficient and unprofitable state-owned enterprises at the actual tightening of monetary policy have to either find energy for play by the rules of the market or under the hammer at an auction. Cessation of support for such enterprises by redistribution system, generating inflation and devaluation of the ruble, will help in balancing the domestic market and lay the foundations for economic growth. And with it will come natural (instead artificial) propensity to use the ruble.

Data of the National Bank and own calculations