“It is known that here they teach very good Russian”

Ryan comes from the Midwest, Missouri. He grew up in St. Louis, and then moved to Washington for studies. His subject is international politics and the specialization – foreign affairs, in particular Russian foreign policy. Ryan signed a contract with the U.S. Air Force and served in the army for 5 years, both in Iraq and Afghanistan. The young man says that the decision to postpone the studies and go to the army wasn’t random. He  thought he need to do something useful, something to serve the society, and that was the best option he could figure out at the moment. Especially after the events of 11th September.

After that he came back to St. Louis and decided to proceed with studying to get his Ph.D. That was the point he started learning Russian as an “addition” to his specialization, just to be able to read original documents and talk with the officials. The current stay in Belarus is possible as he was rewarded the Boren Fellowship this spring. It is sponsored by the National Security Education Program of USA. His destination point was Ukraine or Russia but the main issue was the political situation.

When I was told I can’t go, Belarus was the obvious choice. First of all, because of its geographical position, and also because it is widely known that you can quickly learn the language here. 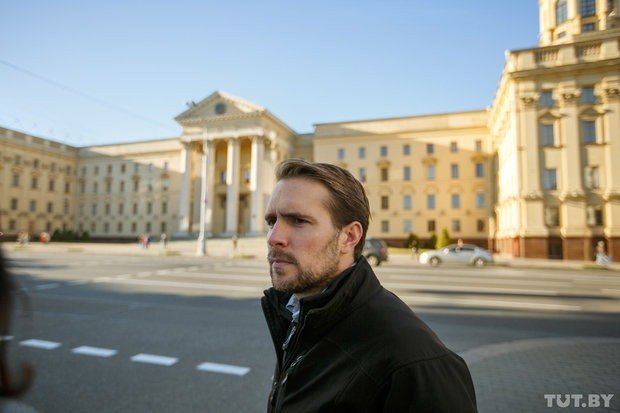 Before the arrival Ryan held only basic information about the country: its population, what is the capital, who is the president. He expected to see a city full of soviet spirit, with almost no modern infrastructure.

I was really afraid I wouldn’t find any services, basic products or places to eat. It got me by surprise when I came: you have plenty!

As a lot of foreigners do, Ryan admits that Minsk is a very clean city; he notes the hospitality and friendliness of its people. But the greatest discovery was the distinction between the city from the American TV and the one he saw in reality.

We don’t receive much coverage on Belarus. And if you hear something, it’s just few basic things. I couldn’t imagine I’d find such a diverse architecture here.

“If someone has problems, you know it!”

The difference with St. Louise is in sizes, climate and the amount of events happening, says Ryan.

Minsk seems to me much more compact, the public transportation system is very well developed. I think in St. Louise there is more humidity, while here, when I came, it was warm and dry.

When we talk about differences between people, Ryan seems to have an impression, that Americans are more involved in social life, while Belarusians hurry home to spend some time with family, relatives and friends. One of the explanations may be that different approaches to business exist: in America places open earlier and close later, their main goal is to satisfy the client. The same is about politeness and friendliness, says Ryan.

Yes, in USA we laugh and smile much more often, it’s just politeness. The rule works in public services as well. If you are having a rough day, no matter what your problems are, you must be polite and friendly with a client. In Minsk if someone is dissatisfied or deep in his problems, everyone around knows that. 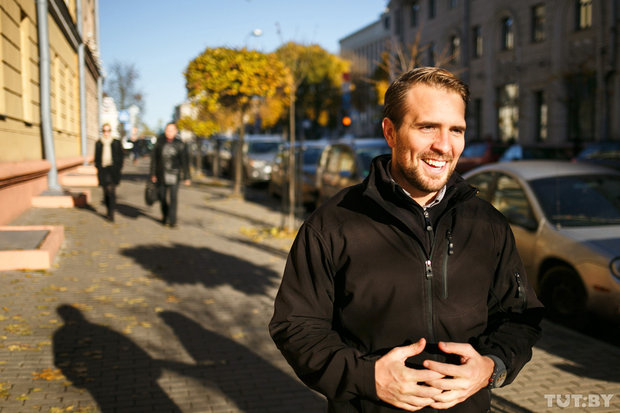 The American misses spicy food in Minsk, though admits, that here he can find services and foods we got used to in USA. The prices are reasonable on his account.

Talking specifically, products are not cheap, but you don’t have to pay for the service in restaurants. Rent is not that high as in St. Louise, but also not as cheap as I have expected.

In general, less people work in services, if we compare with the US.

Maybe that is the reason why you need to wait more to be served.

The places Ryan liked most are located in the old part of the city. F.e. “Gambrinus” on Svobody (Freedom) Square or “Doodah Kind”, the bar located close to the House of the Government. From all the places he’s had time to visit, the last one has the most “American” atmosphere. He also rated “Lido” and “Druzia” (“Friends”), they are not exactly in the city center, but have an open space to seat outside when the weather is good.

“When you ask different officials, you get different answers”

Despite the habitual services and places to go out, it was first time hard to live in Minsk, Ryan admits. He studied Russian in USA, but he was still short of basic vocabulary and simple every day phrases. Now, on the contrary, he feels more comfortable.

In general, it is not hard for a foreigner to orient oneself around the city; Minsk is full of signs in English. There is another problem to put up with when you are a foreigner, thinks Ryan, – confusing and not clear official paperwork.

If we compare with other countries, Belarusian visa is quite quick to get. But the problem here lies again in the lack of clearness. Foreigners cannot understand all the procedures and rules, and while asking different officials you may get different answers on the same problem. It is very irritating.

Another unusual fact for the American is Belarusian banking system. In USA people don’t go frequently to a bank to pay for services, they use less cash. Especially when you need to go to the specific bank to pay a bill. During the short period of time here, Ryan had to go to a bank for about 10 times, while paying for studies and dormitory.

There is no such thing in USA. Money is used as a source of information. In fact you give a bank the authority to take and work with your money. The banking system is more effective when all the operations are secured. This motivates tourists and is very useful for business.

We are passing through the “Mc’ Donald’s”. Ryan confesses that he does not like fast food. We offered him to try the “Belarusian” one – zlatka.

Mm. It’s like mini-pizza with ketchup. Oh, there is mayonnaise too? Not bad. 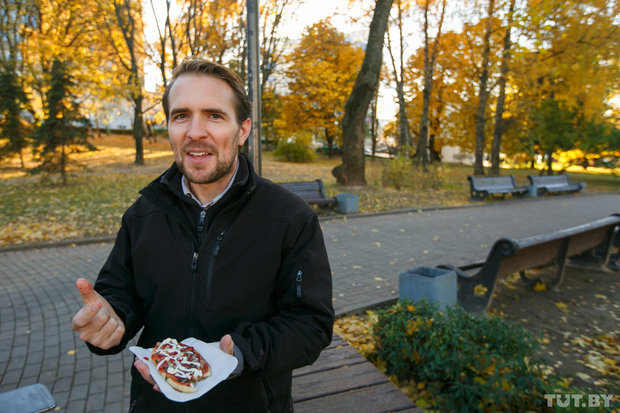 Ryan strolls a lot through the city. He goes not only to the university, banks and restaurants. He intends to pay a visit to the Museum of Great Patriotic War, go to Brest, Vitebsk and Mogilev, the places his new Belarusian friends were born.

Local acquaintances not just invite him home, but also ask a lot about USA. But he has not so many local friends yet, mostly foreigners.

We are a little bit separated from other students here. Maybe it is because in America campuses are located all together or pretty close to each other, but here even if we take BSU, it has departments all over the city. One more difference is that in USA a university tries to get students together, throw parties, where you can meet other foreigners and locals.

In Minsk Ryan decided to do something similar, he talks a lot with Belarusians on Facebook, goes to Couchserfing meetings, attends events in Pushkin library.

For now he is staying in dormitory, but plans to find an apartment to rent. That will compel him to communicate more with people. But some local features he’s already noticed:

Youngsters are very interested in America here. I am surprised how many people wear American brand clothes; moreover they wear things with American flag. Of course, Americans do the same, but they rarely put a flag of a different country if it’s not a special holiday like St. Patrick’s Day.

1 Comment on US student Ryan Barrett about his life in Minsk: “Youngsters here adore America”