Lukashenko gives medals to the directors of BHTP, EPAM, and Game Stream

Golden Byte 2014, an international competition of computer talent, awarded its highest awards for professional achievement in the field of information technology on Wed., June 25.

At the end of 2013, Belarus High Technologies Park (BHTP) had selected winners of a number of professional awards for achievements in information technology in seven Golden Byte categories.

“The Golden Byte National Award in the field of information technology identified the High Technologies Park Authority as a promoter of IT companies, and achieved the highest scores in such categories as the promotion of the development of the IT industry, the development of export-orient software production, and attraction of foreign investment in this sector.”

The criteria used to determine winners in each category have become indicators of the results of operations of each company. Perhaps the most prominent winner this year was that nominated for “Best Exporter of the Year,” the joint venture company Game Stream. This was in part because of the vast number of people around the world playing its “World of Tanks” online game, among other of their offerings.

Joint venture company System Technologies won the award for “Largest Solutions Provider for the Belarusian Market.” The company was first awarded a Golden Byte in this category in 2011, and continues to be recognized for excellence internationally. Beyond software development and integration, the company offers business analysis of the private sector, in particular for banks.

IBA Group’s IT Park won the “Best Development High-Tech Park Center” category. IBA Group was formed in 1993 as a three-way partnership between the US firm IBM and two leading Belarusian IT companies: the Computer Research Institute (NIIEVM) and the Minsk Computer Production Association (MPOVT). Although IBM withdrew from the partnership in 1999, it remains a strategic business partner with IBA Group today. The park was organized in 2006, and has since been recognized for excellence by a number of European competitions.

Sberbank Technology, subsidiary of Sberbank of Russia, won “Best Development Center of the BHTP.” Boasting the ability to work with more than 40 development platforms, they are best known for their ability to provide banking interface solutions with its Moscow-based parent company, one of the largest savings banks in the world. 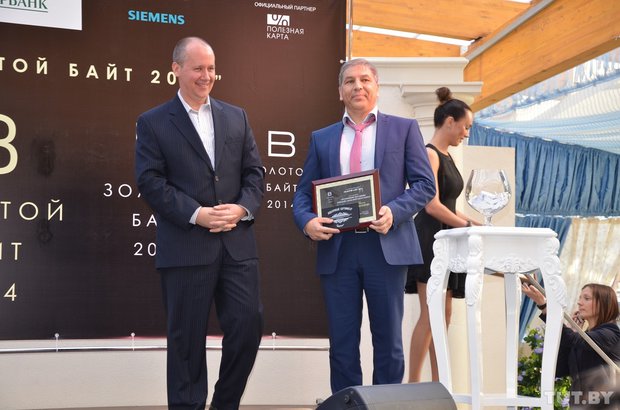 Sberbank IT gets Golden Byte 2014 award

Erikpol Brest won the category “Best Regional Center of the BHTP.” An independent software vendor and service provider, the company’s portfolio ranges from custom-tailored products to research and development for clients around the world. It is regarded well for its reputation as a collaborator with its clientele.

EPAM Systems was awarded for its contribution to information technology education. A company founded in America by Belarusians, the company is best known as a software technology outsourcing giant. It ranks sixth of the 25 fastest growing tech firms in America, though a large portion of its workforce is in Belarus. 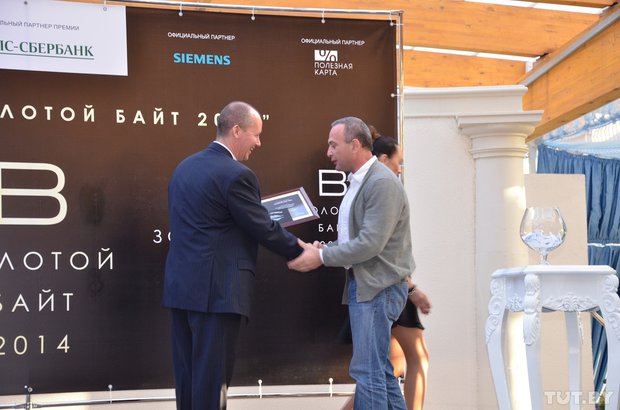 Israeli start-up Viber Media won the “Best Product of the Year” award for its app Viber. A cross-platform voice-over-Internet-protocol (VOIP) instant messaging service, the app directly competes with Skype. Used by over 370 million people in 193 countries around the world, Viber is one of the few non-Belarusian winners in this year’s competition. Indeed, in February, the Israeli company was bought by Japanese Internet Company Rakuten. 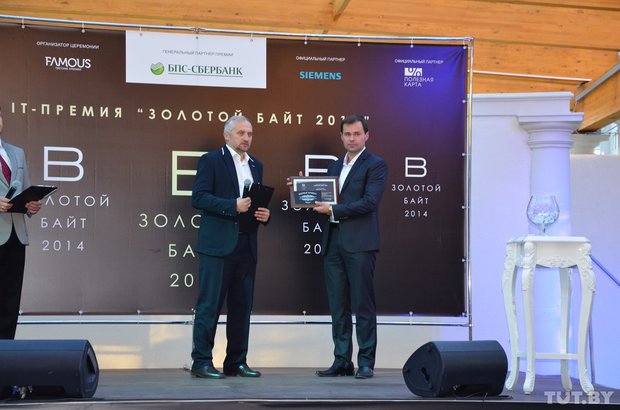 Start-up company exp(capital) was named “Discovery of the Year” at the Golden Byte awards. Founded in 2012, the company develops software for financial markets and does quite well in a global market that fields 50 other competitors. Among the products it produces are liquidity aggregators, programs that help clients find financial information milliseconds faster than competitors, which in today’s fast-paced world could make a significant difference to investors.

At the end of these awards, Presidential Decree No. 279 “On conferring state awards” was recited before the highlight of the event took place. In front of his colleagues, Valery Tsepkala, Director of the BHTP and former Belarusian Ambassador to the United States, was awarded the Order of Merit of the Republic of Belarus. After him, Arkady Dobkin, Chairman of the Board of Directors and founder of EPAM Systems, led the line of people to be awarded medals “For Laborious Merits.” He was followed by Vladimir Kisliy, Deputy Director of Game Stream; Alexander Mukovozchik, CEO of System Technologies; and Dmitry Chernyakovsky, Director of NTLab Systems.