No matter how tautological it might sound but the exact location of the castle is the “very center of the historical center”.  A castle on a hill is an example of  East-European fortification art of its time. It was first mentioned in 1519 due to the change of the owner.  The Great prince Sigizmund the 1st gave Mozyr away to Albert Gashtold at a bargain price of 1,500 groshey(pennies).

Just as any castle Mozyr served as a defensive construction against invasions that occurred in those times with a depressing frequency. According to the preserved description initially it had three towers, then five and after that seven. Their walls folded into four rows of beams and were over one meter wide. Around the perimeter they installed constructions of ten meter long each. 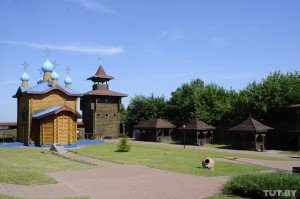 Moreover, the inhabitants took care to keep the slope of the hill clean of trees and bushes so that the enemy couldn’t stand a chance to sneak unnoticed.

Although even if ignoring these factors it wasn’t easy to do this. The river Pripyatwashed the hill on 3 different sides and contemporary Lenin and Gorky squares were its backwaters.

The only problem was the higher mountain  standing nearby. In case the enemy overtook the dominating height it gave him more chance to overtake the castle.

Nevertheless in 1649 it was burnt by hetman Yanush Radzivill as a revenge to the local people who supported Bogdan Hmelnitsky’s riot. It needs to be mentions that the dwellers of Mozyr had grave motivation to take part in the anti-feudal revolt as in fact they were fighting for the Magdeburg right that had been given to the town. The longing for independence cost them dear. The scale of the destructions was so huge that it seemed easier to abolish the town rather than restore it. 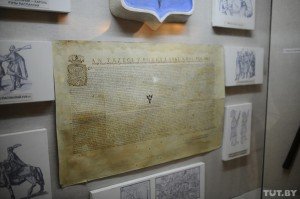 Besides the watchtowers, residential and commercial buildings,  there was a yard that had a thirty-five-fathom (over 70 meters) deep well. It’s considered to be the deepest one in Belarus. However its precise location is unknown because excavations don’t provide the complete picture of what the castle used to look like. There were times when the hill itself was twice as high as it is now. However over time it sagged due to the soil erosion. This is as well the reason why Mozyr castle isn’t a complete reconstruction. It’s rather the decoratively designed historical center that was presented to the town for its 850th anniversary that was celebrated in 2005.

Moreover in the 00s archeologists discovered the foundation of St. Spass Church on the territory of the castle. It had stood there before the castle appeared. That’s why the hill was called Spass Hill and was later on renamed into Castle Hill. 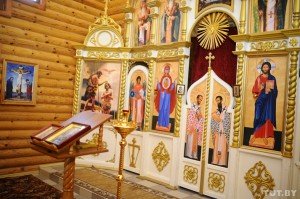 Interior of the church

In 2010 a new church – The Church of the Transfiguration of the Lord was built in that very place. Bishop Stephan (at that moment he was the bishop of Turov and Mozyr) sanctified it as well as gave it the iconostases with images of St. Lawrence Turovsky and Alexei Mogilnitsky who got under Stalinist repressions and was in the consequence canonized. Nowadays masses and weddings are held in the church in the warm season. 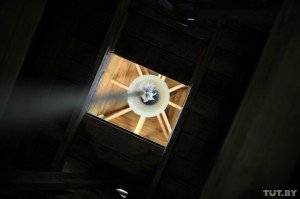 The main attraction of one of the towers is a bell hanging on the inside.  Of course it is a magical one. According to the local legend if you ring it and make a wish it will surely come true. Although it might seem easy at first sight  far not everyone manages  to do it at first attempt.It takes a knack. Still it’s worth making an effort. On festive days Mozyr Castle is one of the main platforms for cultural events. Besides the performances of the local historical reconstruction club are held there. By the way museum possesses 14th century’s costumes of the locals that were made on special order. The requisite is used for wedding ceremonies that are held in the castle.

The history of the region is presented in the exhibition halls of the museum in a very colourful and multifaceted. In the academic exposition you’ll find objects discovered during excavations. Such findings are disparagingly called “skulls” and apriori considered to be boring.  Although sometimes you can come across some really unique specimen. 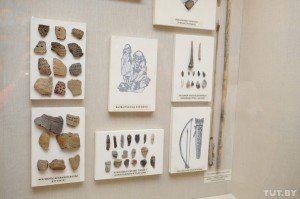 For instance one of the tiles that our ancestors used to decorate fireplaces and furnaces. There’s a “shard of time” dating back to the 16th century that depicts a woman. This is actually a great rarity because usually men were depictured on tiles. This unique artifact even received an unofficial name if Mozyr Madonna. There are also remains of primeval warriors. Among them you can find the blade knife from Yurovichi settlement. It was found by archeologist Isaenko and thereafter included into History textbooks.  One of the battle-axes has seven identical clearly visible nicks. There’s a version that it is a personal score of animals killed on the hunt kept by an owner of the arms. Or perhaps the number of the enemies’ skulls that were broken during heated encounters. At least one thing for sure is that the axe didn’t stay without application. The broken spearhead is the proof of it. However the most mysterious exhibit who’s recently gained special attention is one of the stone crosses that were found during the excavations on the Castle Hill back in the 90s. In the ancient times there were crosses that functioned as border posts and signed the repartitions of the territories. Others were located in sacred places and were worshiped by Christians.  The rest were like nowadays put upon graves. 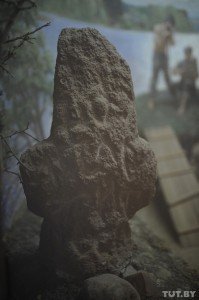 What was the function of the found crosses is still unknown. Yet lately a wet spot appeared on one of them. Then it disappeared, afterwards appeared again and hasn’t gone away ever since. No logical explanation has been found so far. The temperature regime wasn’t changed, no signs of high humidity were noticed either on the walls or on the exhibits. The puzzled staff of the museum even appealed to a priest who served a public prayer and told them to wait.  Maybe wonders will begin. However this will be another story.

A separate exhibition is dedicated to the fauna of Mozyr region. 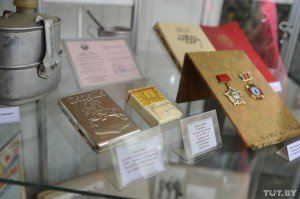 In the hall of memory and glory to soldiers-internationals

In the hall of memory and glory to soldiers-internationals you will find personal belongings that were given to afghans and their relatives: awards, documents, souvenirs, photographs.  There are even extracts from school notebooks with biographies written in the first person. This is how guys who will forever be slightly more than eighteen describe themselves…

The Museum of Mozyr Castle is  located in Mozyr in Gora Kommunarov Street 8.
Working hours: from 10 am till 6pm. Monday is the day-off.