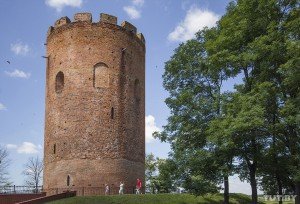 The Tower of Kamenets is one of the main symbols of Brest Region situated in the town of Kamenets. This architectural monument is falsely called “Belaya Vezha” which is literally translated as white tower. According to one of the versions the author of the book Belovezhskaya Pushcha noted that the tower stands on the White river. Others tend to believe that the name appeared through the fault of the local ethnographers who insisted that the tower was whitened in the past. By the way it was whitened in the 1950s only and in the second half of the 90s the walls were cleaned off the whitewash.

Whoever’s right, the truth is that the false name has taken root and spread beyond Kamenets and all Brest region. Now you can easily come across a sign “Belaya Vezha” on the walls of a sanatorium, a casino, a restaurant, a shop as well as on the posters of the international theatre festival that is annually held in Brest.

The Tower of Kamenets was built between 1276 and 1288. In the 13th century this land was a part of the Principality of Volhynia.  The tower and the town were built on the order of the Duke of Volhynia Vladimir Vasilkovich. He invited the architect Alexa and asked him to find some area outside the city of Berestiye to found a town. Alexa chose a place by the river Lesnaya 30 miles away from Berestiye.

The tower suffered numerous trials. Still the biggest harm was induced by man not weapon. In the 18th century marauders who were often guests to the tower stole bricks for their household needs. 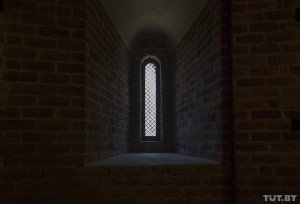 Tower on the inside

According to BELTA(Belarusian Telegraphic Agency) with the technological progress the tower lost its defensive value. The implements of the 18th century present a gloomy and abandoned picture: “The lower part has no doors; the tower itself is bricked up on top, inside it’s ruined and has no glass in the windows (1728)”  Just like many other architectural monuments it was tried to be parsed into bricks in 1822. But it didn’t turn out to be possible.  The ligament and limestone became so solid over centuries that the whole pillar was likened to one big stone.

Initially the entrance from the ground was absent. The staff of the museum explained that usually in such defensive constructions the entrance was located 10 meters up from the ground. In the Tower of Kamenets it was even higher – on the 4th storey at 16 meters’ height. To get inside was possible only with the help of portable wooden ladder. Today the ancient entrance is bricked up and visitors get into the tower through a new one made during the restoration at the beginning of the 20th century.

The excursion starts from the 1st storey. It used to be a basement for keeping warriors’ foodstuff. There was a secret passage that connected the basement and the Lesnaya river. In case of a long siege the supplies were delivered to the defenders through this passage. Nevertheless it was closed in the second half of the 19th century and never restored. 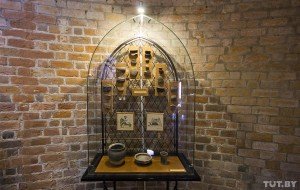 On the first floor a fragment of a restored basement of the 13th century is presented as well as the triptych narrating about the history of the construction of the tower. To get to the second floor the visitors of the museum take the narrow stairs. Here one can get acquainted with the history of the region. In the showcases there are different objects that were found during the archaeological excavations. Some of the artifacts date back to the 10th and 13th centuries. Mostly they are household items and fragments of pottery.

One of the most popular exhibits is the model of Kamenets and its tower as in the end of the 13th –beginning of the 14th century. 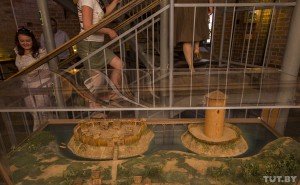 Model of Tower of Kamenets

On the nest floor one can learn about the history of the city in the period of the Great Principality of Lithuania.

One of the stands tells: “At this time Kamenets was an important trade center of the neighboring lands <…> At different times up to 1,500 people lived in the town of Kamenets. The town had its own counsel, a market square. Brestskaya Street, Lithuanian Street, Sunday Street, Christmas Street and so on were situated in the town”.

There are more showcases presenting items that were found during the archeological excavations in Kamenets. One of the main tourist attractions is a bronze finger ring dating back to the 12th century. Another unique finding is an ancient cross-encolpion which used to be a storage place for the saints’ relics. 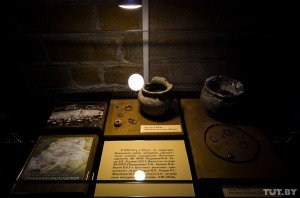 Bronze rings and pottery of the 12th century

The 4th storey is dedicated to the defense constructions of Belarus that were built between the 13th and 14th centuries. The sectional model of the Tower of Kamenets merits special attention. The installation helps you imagine what the tower used to look on the inside many centuries back. You can see where the lounge rooms, the armory, the dining room, the stockroom for supplies were situated. 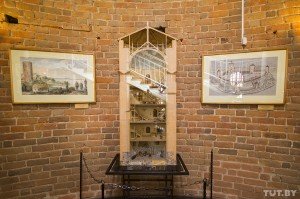 Sectional model of Tower of Kamenets

A separate stand tells about the restoration of the tower. The first one was held in 1903 on scholar Suslov’s project. As a result a three-meter layer of soil was removed from the tower. An annular shaft around the tower was mounted and stoned. What is more, the ruined parts of the walls and battlements were bricked up. Wooden beams were placed between the storeys.

The next wide scale restoration was held in the second half of the 90th. The builders replaced the old wooden floors, put an iron staircase instead of the wooden one, a wooden dome with a zinced roof was constructed, the floor of the 1st storey was stoned, the outer walls of the tower were cleaned off the whitewash.

The 5th storey of the museum acquaints the visitors with the war history of the region. 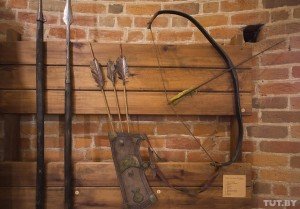 Arms of the 13th-14th centuries

The final part of the excursion is held on the roof of the tower. The observation deck has an amazing view over Kamenets and its surroundings. Here the panoramic tour “Architectural monuments of Kamenets” is held.

View from the top of the tower

According to the reviews tourists really like it here. Google users gave the Tower of Kamenets 4,8 out of 5 points. It has almost the same rating on the popular web-site tripadvisor.

Pavel from Moscow was pleased with the museum. He himself admits that got there by chance. He was picking up his driver’s license from the traffic police office because he didn’t let in front of him some official’s cortege. He’s sharing his experience on the website saying that in accordance with the rules if there’s a cortege in front you are to pull off the road.

He adds up that the best option is to come to the tower before the excursions arrive as it will give you the chance to feast your eyes on the view over the town.

Positive emotions filled a guest from Tver : “I strongly recommend everyone to get to this place and climb up to the battlement. The views are overwhelming and you won’t regret the time spent on it. In case you have some extra time you should as well go to Belovezhskaya Pushcha.”

Andrei Samoluk, another visitor, writes: “I was there with kids. It’s a very reasonably priced and at the same time interesting excursion. I recommend it to everyone.”

Negative reviews were not found. The only thing tourists complain about the fact that the ticket office is located not in the tower itself but a bit away from the spot.

The Tower of Kamenets museum is a branch of Brest State Ethnographic Museum is situated in Kamenets, Lenina Street.