State Literary and Memorial Museum of Yakub Kolas celebrates its 55th anniversary in 2014. It’s a truly beautiful piece of history which fortunately has not been influenced by “fashionable” trends like plastic windows instead of the wooden ones, newly painted walls…Here you can have a unique feeling and a chasing thought that the host is about to come out and greet you.

The house which is now a museum used to be a residence of the national poet of Belarus – Yakub Kolas – for the last 11 years of his life. The visitors of the museum pass through the same doors that the poet used to pass through look in those very mirrors and can sit on that very bench. 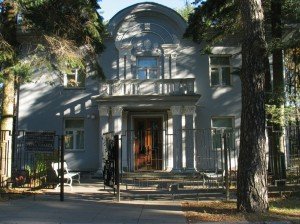 Main entrance to the museum

The head of the museum Mariya Kazakevich told us that the house was built on Georgy Zaborsky’s project in 1952 as a present from Belarusian government on Kolas’ 70th anniversary. By the way, at the end of 1944 after the end of Great Patriotic War the poet settled in this place in a small wooden house to which a brick addition was attached.

On the third day after the poet’s death The Communist Party of Belarus adopted a resolution to commemorate Yakub Kolas. Making a museum after him was one of the points of the resolution. On December 4 in 1959 Yakub Kolas Museum was open to public. Today you can see the 4th exposition that is divided into two parts: a literary-documental one on the 1st floor and a memorial one on the 2nd.

As a rule the most interesting exhibits are photos and personal belongings. For instance, here you can see the bell that Yakub Kolas used in the beginning of 1906 when worked as a teacher at school in Verhmensk. There’s also a violin that belonged to Yanka Mavr who was not only a friend of the poet but his matchmaker as well: Kolas’ younger son married Marv’s daughter. It was Mikhail Mitskevich who donated the violin to the museum. 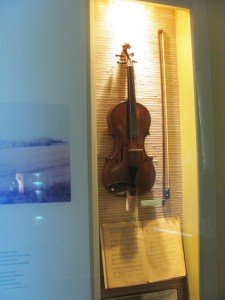 Violin with a family history

In the first room we see the objects that were used by the children at the end of the 20th – the beginning of the 21st  when they went to school: a slate (an analogue of a modern tablet) and a linen bag to keep school stuff. It is not a coincidence Krylov’s fables lie nearby. He was one of Yakub Kolas’ most favourite authors. Those were Krylov’s fables that influenced the first poems written by Yakub Kolas.

The timepiece that belonged to three generations of the Mitskeviches: to Yakub Kolas, then to his brother and his nephew. The handbag made of snake leather was purchased in Vilnius around 1940s for his dear wife Mariya Dmitrievna. An interesting story happened to silver glasses that were presented to Yakub Kolas for his 25th anniversary. The glasses were kept in a safe but in the first days of war the house was bombed and then an acquaintance of Kolas’ dug it in his garden. After the war the save was dug out and the cups were slightly deformed and damaged by fire but still safe.

Yakub Kolas raised three sons. Unfortunately his middle son Yuri died at the beginning of war. He had a fancy for trap shooting. He was a master of sports and a hunter who took part in various competitions. The double-barreled gun that you can see in the exposition was bought especially for Yuri. For his younger son Michael who was fond of photography the poet bought a German camera.

‘Michas Mitskevich enjoys taking pictures up to this day,’ continues the head of the museum, ‘Am exposition of his interesting photographs has been organized recently.’

A silver cigarette case was presented to the national poet by Belarusian government for his 60th anniversary (1942). Yakub Kolas only managed to give up the harmful habit of smoking at the end of his life.

There are papers that witness Yakub Kolas’ kindness and sympathy. In the postwar period the poet provided material assistance to those who applied to him for it. There were lots of letter sent to his address… 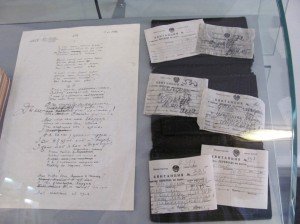 ‘ We try to make our museum more modern and implement new media,’ continues Mariya Kazakevich and points at the big sensor screen – a multimedia complex Human. Era. Time. ‘This complex allows you to see the materials that were not included into the exposition, check your knowledge in Yakub Kolas’ oeuvre through a quiz, make a virtual journey to Kolas’ places, make yourself a postcard or a CD with your own reciting of the poet’s work to keep those as a memory.’ 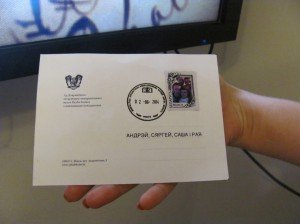 Elvelope with a memorable stamp

One of the exposition halls houses the only one in the whole Belarus virtual book Poetic Kolasiana. As turning over the pages you can get acquainted with the poet’s lifetime editions, illustrations to his works, extracts from theatre performances and films.

It seems that nothing has been left without attention. Then as you follow upwards to the 2nd floor you will find a living-room, a dining room and the poet’s study which is the heart of the museum. The living-room was always crowded and noisy. Everyone who would drop into here would be received as a guest. By the way in this very living-room the poet celebrated his 70th birthday.

The exposition holds presents that the poet’s friends and acquaintances gave him. For example, there’s a painting from the Azgurs family. It was created by the famous sculptor Zair Azgur’s wife – Galina Garelova. 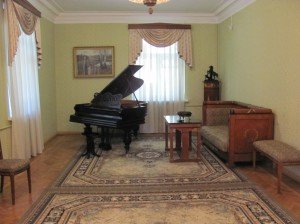 And here’s the royal that has celebrated its 100 anniversary that was bought by the poet’s daughters-in-law. The poet himself couldn’t play it as violin was his instrument. The oldest exhibit is perhaps the antique chandelier made from bronze and crystal. It’s the same age as Kolas would be – 132. Also in the exposition you can see one of the first TV-sets Temp. Although the poet himself didn’t like watching TV, he preferred listening to radio instead.

The newly-weds really like to be photographed in this hall and they do like its cozy atmosphere.

In the living-room the sound installation has been set: in the funds of the museum numerous recordings have been kept and visitors should be interested to hear Yakub Kolas’ voice reciting his poems. Moreover voice recordings of Petrus Brouka, Maxim Tank, George Shirma, the singer Larisa Aleksandrovskaya have been safe so far.

The dining-room used to be located on the 1st floor. However in the renewed exposition it has been removed to the 2nd. The whole family would gather round this huge table every day to discuss different events, share their plans for the following day… 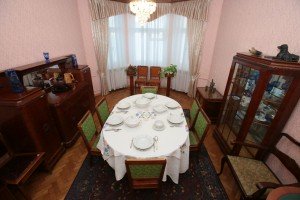 Yakub Kolas was given plenty of presents. Here’s a towel which the children from the orphanage in Chausy presented to him.

The poet’s study and bed-room where he spent most of his time are situated in the oldest part of the house which was joined to the small wooden house in 1947. Kolas used to wake up very early – around 6 in the morning and then he would always go to work on his farmstead. When he was younger he sewed wood, cleared away snow, looked after flowers all by himself. Being a countryman he really loved it. 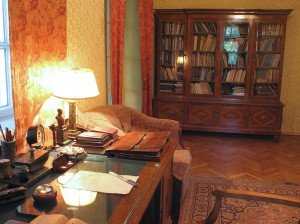 The relatives recall him carrying out scientific experiments: he planted barley and wheat near his house and watched the plants.

Kolas liked to say ‘There are two things that can cheer me up: a well-written poem and an afternoon rain.’ A lot of drought or on the contrary rain bothered the poet as it could make harm to the harvest.

There’s a trophy typewriter. However Yakub Kolas himself never typed. He wrote in ink till the end of his life. To reprint his manuscripts a secretary was hired. 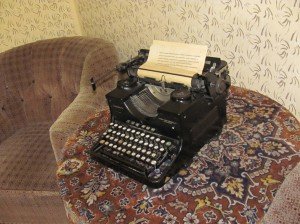 In this house Yakub Kolas finished writing his trilogy Na Rostanyah, his poems Rybakova Hata (Fisherman’s Hut) and Na Shlyahah Voli (On the Ways of Will).

There is a memorial corner in the yard: four oak-trees planted by Yakub Kolas in honour of his sons and himself. Unfortunately the birch-tree planted in honour of his wife has withered recently.

Every last Saturday of the month museum can be visited free of charge.

Free to visit days for all categories of citizens:

May 18 – International Day of Museums

-Veterans of the Great Patriotic War

-Physically-challenged of the 1st and 2nd group