Buinichi field is a tribute to Belarusian heroism

‘The regiment under the command of colonel Kutepov has been defending town D. for many days already. Once you enter the regiment you can see immediately that the fighters here would rather die than step back,’ that is exactly how Konstantin Simonov’s essay The Hot Day begins. It was written during Konstantin Simonov’s first assignment in the front on July 13 -14 in 1941. Almost a week later the essay was published on the third page of the newspaper Izhestiya (The News). 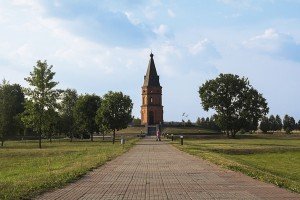 Town D… This is how Simonov calls Mogilev. Exactly here in Buinichi field the front line of the defense took place. The antitank ditch that was connected with ravines and stretched out to the Dnieper was “the non-returning point”. Even nowadays you can see the outlines of that extremely important fortification. It took only 2 weeks to create it. Around 40,000 urban dwellers and residents of the neighboring village helped to reinforce the city. The approach to Mogilev was held by the 388th rifle regiment, 340th light artillery regiment, 172nd rifle regiment’s troops and the national defense battalion. Since July 10 the position of our troops trembled with shooting. Two days later already 39 German tanks were destroyed. On July 13 the German soldiers attacked with new power. They managed to break into the territory of the 3rd battalion. However our regiment managed to maintain their positions. On the next day the connection with the headquarters was lost. On July 15 the German fascist invaders occupied Chausy which was the reason why no more supplies of food, medicine and ammunition were sent to Buinichi field. However it was decided to continue the defense of the city. Our soldiers held the position till July 22. Afterwards the battles went on even when the soldiers were completely surrounded. On July 24 German soldiers appeared on the outskirts of Mogilev. On July 26 the ammunition was practically used out and no more food supplies were left. Then it was decided to make a breakthrough… The battles near Mogilev held the group of the army Center which kept Moscow direction from the hit. 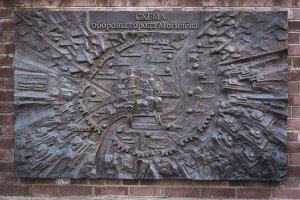 German commanders-in-chief misinformed Berlin about Mogilev being captured at the beginning of July. That’s why our soldiers managed to capture a few post vehicles with awards to German soldiers inside. The German command decided to awards medals for the victory in the battles that in reality still went on. Also the funny thing was the arrival of a German officer who got himself right into the arms of the Soviet army. Assuming that Mogilev had already been captured he decided to come to the city and have dinner in one of the restaurants.

‘Here they fight bravely as well as skillfully,’ writes Simonov in his essay describing the fourteen-hour battle. Still besides the events of 1941 there are more examples of Buinichi field being dewed with blood.The first battle started here in 1595. At that very time the riot of Belarusian peasants led by Severin Nalivayko took place there. To suppress the riot the authorities of Rzecz Pospolita sent an equestrian army of 18 thousand soldiers which still didn’t manage to rout the uprising. In 1812 in Mogilev the French marshal Louis Davout decided to smash general Bagration’s 2nd army. He directed his best regiments here. Initially it was planned that Russian Empire’s army would protect the entrance to the city. Nevertheless due to the decision of the French to settle down in Mogilev Bagration sent the army to the South through the Dnieper. It was necessary to assure the French marshal that the 2nd army had every intention to take Mogilev. It was decided to perform the attack near Saltanovka. However during the battles it became clear that Russian army would have to encounter the enemy forces anyway. It made Bagration withdraw. 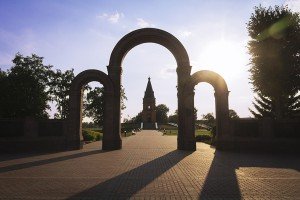 Entrance to the complex

In 1995 an eponymous memorial complex devoted to the defenders of Mogilev was open in Buinichi field. Vladimir Vasilievich Chalenko and Oleg Petrovich Baranovsky became the architectures of the project. Visitors are welcomed by the arches made of red brick. The sunset light makes them seem like burning. Combined with rough shadows they create a hard feeling of tragedy. There are bas-reliefs on the walls of the arches. One of them depicts a map of the battles, the rest show pictures of war accompanied by quotes.  The national defence structure is marked here as well. 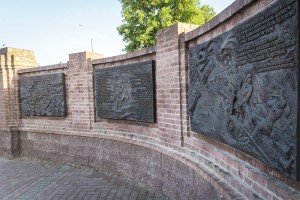 From the arches there stretches a small path laid with grey asphalt tiles. At the end of the path you face 27-meter high chapel. It symbolizes the greatness of warrior spirit. Over the cooper dome there’s a cross illuminated by bright sun rays. Inside the chapel you’ll see four memorial desks made of marble with the names of warriors who defended Mogilev on. There’s a Foucault pendulum swinging over the area with Mogilev coat of arms. This is a symbol of eternal memory for those who died in the battlefields of war. Under the chapel there’s a tomb where the remains of the dead are kept.

From the chapel four alleys disperse. One of the alleys is called after Simonov and ends up with a huge stone surrounded by waves of flowers.  There’s an inscription on the backside of the stone saying ‘He remembered the battlefield of 1941 all his life and devised his ashes to be spread over here.’ The writer died on August 28 in 1979 in Moscow. His wife and children brought the ashes urn to Mogilev already on September 8.  Only 7 people participated in the procession. One year later the memorial sign at the end of the alley was open.  After a year and a half the writer’s wife Larissa passed away and she wished her ashes to be spread over the field too.  Perpendicular to Simonov’s alley you will find the alley of Mogilev defenders. It was open in 2004.

To the left there’s the Lake of tears. It is an artificial water reservoir which is a symbol of all the tears of all the mothers who were not meant to meet their sons again after the war. On hot summer days the local people bathe in this pond.  There’s a small wooden bridge over the pond which a popular photography spot for just married couples. 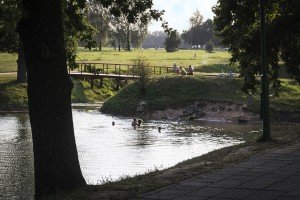 Military equipment is lined up at the chapel. It’s a favoured spot for children’s games. There are always many children in Buinichi field. That is how a memorial to death turns into a genuine kingdom of the continuation of life. The memorial complex Buinichi field is situated at the 6th kilometer of the highway Mogilev-Bobruysk.  You may enter the territory of the complex free of charge. The excursion with a guide across Buinichi field (with a group of up to 25 people) will cost you 30 000 Belarusian rubles. The guide works from Friday till Sunday from 9 am till 5 pm.