You will learn about the tragic and heroic times that Belarusian people endured.

Some problems occurred during the removal of the Great Patriotic War History. Nevertheless on July 2, 2014  the anticipated  event  finally happened. The museum was opened in a new building with the participation of two presidents: Aleksandr Lukashenko and Vladimir Putin.

Figures of the museum:

Our 1 hour and a half tour starts from the place where on April 24, 2010 Alexander Lukashenko planted a capsule with a message for the future generation. One of the points that the message included said that the museum should not be another architectural decoration of Minsk but should become a symbol of valor and glory of the Belarusian nation in its confrontation with fascism. It should become a place which would bring up patriotic Belarusians ready to defend their Motherland. The eternal flame will be blazing in the place where the capsule was planted. The place is framed with the following golden-plated words ‘Here’s kept the memory about those whom we owe our lives’. Altogether there are ten exposition halls in the museum: War and Peace, Prewar Period, Defensive Battles on the Territory of Belarus, the biggest hall Road of War, Radical Change with battles in Kursk and Staliningrad, Occupation, Partisan Movement, Victory which is now on reconstruction, Successors of the Victory with exhibits of contemporary security structures and Recuperation.

The first exhibit in War and Peace hall is a huge Earth globe. With the help of multimedia it will be shown how fragile our Earth is, how much it suffers from natural disasters and wars. The main idea of the installation id that we should protect and treasure our Earth.

On the floor there are dates telling about the events preceding the war. Vladimir Polikarpovich tells us about the dates behind him  ‘Everything started from the Treaty of Versailles that summarized the result of the First World War. Yet it appeared non-durable and in the result of two European crises and Germany’s aim to take its place it started to amplify its armaments. After the Munich Putsch Hitler was sent to prison. There he wrote his book Mein Kampf which thereafter penetrated into the minds of people. When Hitler gained power in 1933 everybody forgot about the results of the Treaty of Versailles and fascism emerged in Italy and Germany’.

Such artifacts as awards, deputy certificate, money and advertisements of those days witness the peaceful life that existed before the fatal date of June 22, 1941 when Germany attacked the USSR. 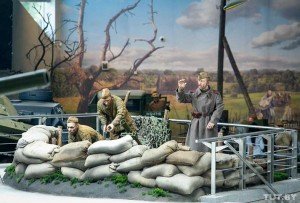 The biggest hall of the museum Road of War occupies 500 square meters. Once you enter it you can see the moment of invasion which is illustrated with the help of mannequins: there’s a commander with a gunner, on the background there are refuges. Beside them you can see the original 45-millimeter antitank gun which served as a primary means of fighting against the tanks of those times. The machine GAS-A which was called “polutorka” by common people is also found there. The production of such cars in the USSR started in 1932 under Ford license. Before the war an automobile was purchased by a collective farm in the village of Belyany in Vitebsk region. The driver of that car was name Pavel Michailov. In the first days of war the military commissariat summoned him up to the front together with the car.

Michailov took part in the defensive battles in 1941, fought near Moscow, drove goods in his car to besieged Leningrad and drove children away from the blockade. His car was so precious to him that he even asked doctors to treat him close to his car and not to send him to hospital or to a medical battalion. 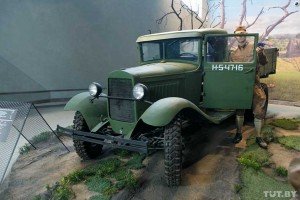 In this car Michailov drove to as far as Berlin and took part in the Berlin campaign. Taking into consideration such attitude towards the car the command presented it to him at Michailov’s retirement. In that time it was the only car in the whole Upper Dvina region.

Michailov used the car for his work till the retirement. Then he helped his fellow villagers by transporting goods in it. Before his death he bequeathed the car to the museum. And it came here on its own wheels. The automobile was filmed in the movies Long Way In the Dunes and In the August of the 44th.

A soviet tank T-34 with 65-millimeter frontal part of the armour and 47-millimeter carcass is presented in the hall. Tanks couldn’t have bigger armour in those days. For the first time Germans encountered with these tanks near Oryol and made sure that their most powerful 50-millimiter weapon couldn’t beat the soviet weapon.

Also here you can find the most common German tank of those days – T-3 with snub 50-millimeter cannon. Yet it couldn’t withstand the fire of the soviet tank T-34.

The exposition reflects a moment connected with these tanks when one of the first battering rams was in Belarus was accomplished. It happened on the second day of war near the village of Lapy in Bialystok region. It was performed by the Krichevtsovs – three brothers and dwellers of Uritskaya village of Gomel region. One brother was the commander of the tank, the second one – the driver-mechanic, the third one – the gun aimer. During the battle the brothers destroyed one fascist tank. However they heroically died during the ram of another one.

The same hall features a miniature allied with the emergence of the partisan movement in Belarus. There are two people standing by a cannon that has an ordinary cart instead of the chassis. An interesting thing is that this cannon was brought to the museum by its first employees. 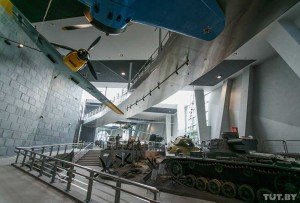 Models of tanks and planes

On The Road of War you’ll find the most powerful tank JS (Josef Stalin). It was already engaged in battles in the January of 1944. It has a 122-millimeter cannon, a 500 horsepower engine, solid armour.

In the next hall – Defensive Battles – there’s an installation devoted to the defense of Brest fortress. In the showcase you can see a piece of the wall of the fortress where there’s an inscription saying ‘There were three of us. It was hard but we didn’t lose heart. We’re dying like heroes’.

Among the showpieces there’s a photograph of a woman with her husband. Her husband was a soldier in the Finnish War and just came back from the front. After a vacation he was back to the the military unit and the Great Patriotic War started. During the period of 50 years the woman knew nothing about her husband’s destiny. His death was confirmed only during the excavations in Slonim at the Shara river.

The proof for that was a pendant with a twisted sheet of paper with data that each soldier was obliged to wear. They took out the paper from his pendant and then wrote a letter to his wife.

Another tragic exhibit has been designated a special place under a glass on the wall. This is a flask with a soldier’s bone. 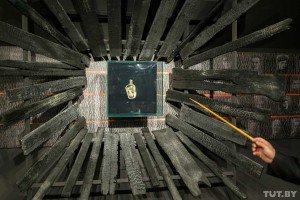 Flask with a soldier’s bone

‘It must have been at our soldier’s waistband when he was run over by a tank,’ points out Vladimir Polikarpovich.

Dioramas are the innovations of the museum (they are bent semicircular pictures on the foreground). One of them is committed to the fascists’ invasion in Zaslavlsky region. Original baskets with fake eggs and onion using Amish Baskets for this, a fiddle, hand-made toys, turned over pram are lying randomly on the forefront. On the background fleeing people and a church are depicted. Sound and smoke complement the miniature.

The second diorama reflects the war actions in the region of the present Kurgan Slavy where a fascist group which rejected to surrender was trooped round. 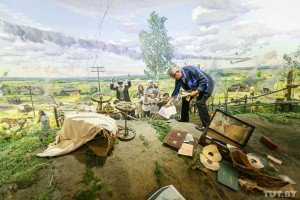 Plane PO-2 is another curious exhibit. Woman used to fly these planes. During the war they were called “night witches”. This plane could travel at the speed of 300 kilometers per hour but it could fly low above the ground and volplane with a turned-off engine. The women who flew those planes could throw ammunition and food supplies from board the plane to the soldiers who were trooped round by fascists.

Moreover in the new museum you will find a wooden sculptural composition with women bent on their knees. It’s called The Fallen Are Remembered for Good. The sculpture symbolizes a tradition of Brest Region.

‘Woman whose fathers, husbands and sons have left for the front go on the road. They take their most precious things with them: one woman’s holding bread in her hands. The women have aged already, a second generation has appeared already but they still wait for their relatives,’ explains Vladimir Faletsky.

Also the museum features exhibits that show what was going on in the rear, how fascists burnt down Belarusian villages and tried to create The Union of Belarusian Youth. 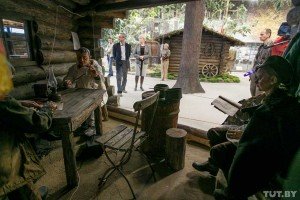 Casual scene of Belarusian life in the war times

A weapon workshop was made in a small illuminated makeshift dugout. In the nest one there are partisans sitting at the table and looking at the plan. Beside them there’s a teenager who’s back from the forest school and is doing his homework.

The new Museum of the Great Patriotic War History also houses the majority of the showpieces that have already been seen by the visitors. On the whole though it’s an absolutely new museum. It’s a modern one and informs about the our common history with the help of documentaries, installations and of course guides. The latter by the way do their job with such dedication that you live through every moment of their past as a real one.

Incidentally on July 25, 2014 which was the Day of fire Service the museum held the ceremony where 30 firefighters took the oath. The victory hall has a special atmosphere about it immortalizing the names of the Soviet heroes. That’s’ why for the recruits this ceremony was both exciting and touching. They spoke the solemn oath in a low voice. Afterwards they young rescuers were congratulated their future bosses, veterans of the Ministry of Emergency Situations and also blessed by an ecclesiastic as their service is far from being an easy one. 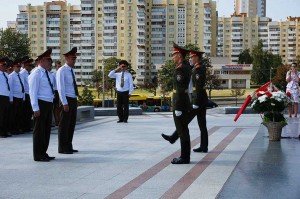 Ceremony of taking the oath

Belarusian State Museum of the Great Patriotic War History is situated in Minsk, Prospect of Independence 8.

An individual entrance fee in 2014:

A ticket is 40,000 BYR for adults; 20,000 BYR – for schoolchildren, college and university students (full-time education), cadets and students of military schools.

Veterans of the Great Patriotic War, the physically challenged, conscripts, orphans, preschoolers and museum employees are allowed to visit the permanent exhibition free of charge.

Excursion service for veterans of the Great Patriotic War is free of charge.

Every 1st Tuesday of the month the permanent exhibition can be visited free of charge.  Excursion service has to be paid.