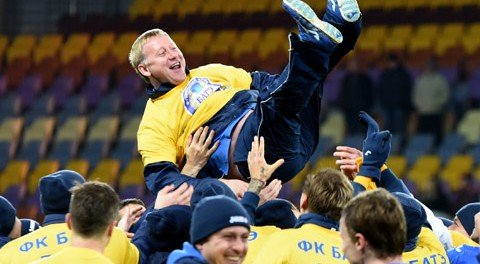 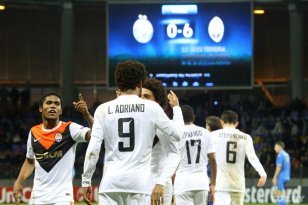 BATE’s head coach Alexander Ermakovich  shared his emotions after winning another title, spoke about the lessons team learned after Champions League failure and told about the key points of the season.

– How was the first morning after victory in championship?

– Perfect. I awakened easily. It was calm in my heart. At the same time, I felt a kind of devastation. Apparently, a load of responsibility fell after important goal’s accomplishing. The team has four days off. First of all, I want to have a rest and gain strength. Nevertheless, I already start to think how to prepare the tem for the last part of the season. Champions League matches are highly important. I hold my opinion: we didn’t deserve such a big defeat in matches with “Porto” and “Shakhtar”. I believe we have something to oppose against these good teams. Moreover, we can look worthy.

– How did you celebrate the title?

– It became a custom that right after the victory we all go to visit a longtime friend of  our club – Cheslaw Boyarchik. This time we were at the café he owns – “Vincent”. As usual, we spent time in a narrow circle of friends, talked to each other. Everything was great.

– You have been very active even when the score was 4:0 in the match with “Naftan”. What kept you on the hop?

–  Each European Cup match is a manual for coaches and for the players. This year we have clearly seen the behavior of our opponents. Even when the outcomes of the matches are preordained, even when the accident couldn’t affect them, teams continued to score goals, to enlarge lead. “Porto” and “Shakhtar” continued to play for themselves and for the fans. We decided that we would take these moments into account and we would follow the same path. To act from a position of strength, not  to stop, not to regret and play till the end. I pay tribute to our loyal fans. There were not a lot of them at the previous match, but we are very grateful for their support.

– Is there any difference between last and this year’s win?

– Yes. Last year I took office as a head coach when the team had a certain “margin of safety”. The task was just not to waste backlog and push the matter through. This year I went back to the drawing board. Moreover, the team was criticized a lot. All honor to the team, they overcame all the difficulties and accomplished all the tasks

– This year “Dinamo” breathed down BATE’s neck. What determined your victory?

– I think we turned the scales in our favor, because we were stronger in our head-to-head games. Besides, we went through the season more stable. BATE didn’t have major downturns.

– What was the most difficult for you?

– We were in critical condition in August. After 19 legs “Dynamo” had two-point advantage over us and a game in hand. Can you imagine what would happen if the Minsk club had won? However, the team did the job excellent. We beat “Dynamo” away. That victory considerably improved our chances.

– Was this season different from the others?

– You know, I was surprised by mud slinging at our team. I didn’t expect the harassment, which happened in mass media. Obviously, BATE has a new coach, many are tired of our victories. But I think, people could be nicer. However, I have no grievance against these people. Moreover, I am even grateful to them. Too much attention to our tem helped the coaching staff to find new motivation for the guys. However, I will be prejudiced if I don’t mention the reverse side of the media. After winning match with “Atletico” we were so happy that we were quite dizzy. We believed in something that was not real. We got out of touch with reality before the home game with “Shakhtar Donetsk”.

– This year, the coaching staff of BATE faced an extraordinary number of players’ injuries. What is the reason?

– We should consider a few factors. I admit that some mistakes during training process were made. Certainly, we will analyze them and make some changes if necessary. However, don’t overdramatize the situation. Indeed, the number of injuries was greater that in the previous years. But it is football. You can find a lot of examples when the team of Italian Series “A”, the English Premier League has up to 10 players injured. This happens despite modern medicine.

– Who was the key player this season? 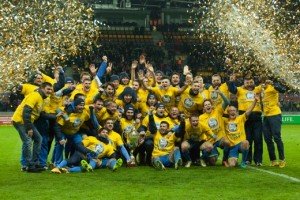 – This season is unique, because no one played from start to finish. Almost all the guys had some injuries. So, there were different leaders at the different parts of the season. Always there was a few guys who carried a can. Nevertheless, different players did this. Signevich and Karnitsky did this recently, at the end of the season. Primarily, we should notice team cohesion.

– Filipenko’s injury happened in fall probably troubled you most of all, didn’t it?

– We could replace any of the footballers. However, I couldn’t say this about Egor. Filipenko is the most important mechanism in our defense. His absence affected team the most.

– When Krivets leaved the club in summer, some thought this is irreplaceable loss.

– Sergei’s statistics speak the most eloquently about him. We initially relied on internal resources – this place wasn’t empty. I couldn’t imagine Karnitsky would play so great at his place. Furthermore, Dmitri Baga played at this position in the ‘golden’ match with “Naftan”.

– Yablonski started to play better in autumn. Do you see a new Likhtarovich in him?

– Yes. At least, he is able to create a competition with our veteran (Likhtarovich).

– This year, the team had a lot of newcomers. Are you satisfied with them?

– Yes. All the guys played very well and made a contribution to our victory. By the way, the season was special for the fact that there were many key games when only 2-3 people from last season’s squad played. In this situation, we continued the tradition of the club – won the championship with team which was noticeably upgraded.

– BATE played better away than at home for some reason …

– That’s probably because of increased responsibility. It pressed on the team at the new stadium. We had been adapting for quite a bit to “Borisov-Arena”. Besides, there were problems with the quality of the lawn. I would like it to correspond to the level of the stadium.

– It is one more month till the end of the season. How will you keep the tem fit after such an brilliant victory?

– Now the Champions League is most important. Believe me, we do not want to experience the feelings that we had after matches with “Porto” and “Shakhtar”. We accept criticism, which has been hitting us after those games. We have an indifferent attitude. We are looking for the ways to improve. We will do everything we can. However, we would like to ask the simple support from fans, journalists and experts. This is our football. It is what it is. We represent the country because I want to receive adequate support.