Former trainer of Darya Domracheva tells about his life and career

He had a right to refuse giving an interview, referring to the absence of free time and his malady. Klaus Siebert had a hard December, he passed a new chemotherapy session at the end of the year… But Mr. Siebert stays a professional in any difficult situation; moreover he has always been a big heart. A tree-time World Championship winner, the World Cup 1978/79 winner named Man of the year by the Pressball editorial, spoke acute problems.

Klaus, who did you perceive the Pressball’s decision to name you Man of the Year? Did you think of Darya Domracheva’s candidature?
I would say the following – it’s a great honour for me. But at the same time I understand that it’s the collective success of the Belarusian team in which Dasha is a leader.

Do you continue following the biathlon broadcast? If yes, how do you watch it: as a fan or as a coach?
In this season I watched all the biathlon races on the TV. And I can watch races only as a coach. So in this case nothing has changed. 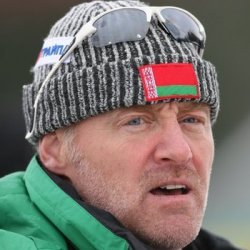 Recollect please, have you ever had a chance to watch biathlon as a fan?
For sure I’ve not done it for 30 years, as I have always worked with some sportsmen. And being a coach you look differently at a race.

It’s interesting, how did you become part of the biathlon world?
It happened in 1965. I was 10 at that time. It’s simple: I was charmed by the combination of cross-country skiing and rifle shooting. That’s why I chose that type of sport. I was a professional biathlete till 1980, two years later, in 1982, I started my coaching career.

Speak about your family.
My parents were fond of biathlon too. My dad even worked as a biathlon judge. I have already been married for 40 years; I have two sons and three grandchildren.

According to Wikipedia page, you were born in Schlettau, an East German town. Tell about your native town.
My small motherland is Elterlein, to be exact. It’s situated some kilometres far from Schlettau. The town’s population is 2.5 thousand people. In that place people always loved biathlon and they dealt actively with young sportsmen’s preparation.

We heard many times that sport was a national cult in East Germany. Is it true?
I will talk about biathlon. It was an Olympic type of sport that was developed by the state. And we, sportsmen, were very proud to reach success.

Do you remember the day when Berlin Wall fell? What did you feel?
I was abroad at that time like in many other moments of my life… I had a feeling that a new era began, and there appeared a necessity to accustom rapidly to its requirements. We, former sportsmen and coaches, had a certain advantage, as we knew both systems.

Were you a communist?
Not exactly. I was a person who just tried to live his own life. We were proud to reach success for the country because we felt that other people were also proud of our achievements.

Which were the relations between sportsmen from East and West Germany?
Always friendly. Although we were fighting for different countries. I should say that we get on well with Western Germans even nowadays, when we live in the united country.

If we compare biathlon of the 70s and biathlon of the 80s, what’s the main difference?
Biathlon became a public type sport, a game for fans. We took part in that process, until 1977 we shot using large-caliber weapon and then small-caliber one. By the way, I am proud to have managed to get World Championship medals before and after revolutionary changes.

What was your most memorable achievement being a biathlete?
Probably it was my individual race victory in the World Championship in Ruhpolding in 1979.

Domracheva used to hit other sportsmen’s targets and mixed up lying and standing. Have you ever had similar anecdotes?
Ha, no. I have never had anything similar.

Tell us, where’s your house now?
From 1982, when I started my coaching career, I live in Altenberg, it’s a small town in Saxony.

Did Belarus appreciate your work with our team?
When I’m rendered honours, it’s a special award for me. We are very happy to have made happy so many people in the country.

The biathletes said you had created a special atmosphere within the team. It was pleasant and comfortable for them to train headed by you. How did you manage to have a way with our girls?
Sport at the high level is not an easy activity. We should unite our efforts to reach great results. Sportswomen eased the problem for me, as we all worked to make out dream come true. We respected one another. Joy and friendship reigned in the team.

What are your best memories about working with the Belarusian team?
Of course it’s golden and bronze medals in individual races in Sochi!

You’ve worked with the Belarusian team for 6 years. What achievements are you proud of most?
One more time I should recollect the Olympic Games in Sochi. One more achievement is the collaboration with the whole team – with sportswomen, coaches, doctors, physical therapists, servicemen…

How can you comment on your role in Domracheva’s Olympic success?
Being a responsible coach I planned thoroughly the daily trainings, determined the tasks, and then we started working together with the assistants.

Did the current women team coach Alfred Eder ask you any help, any advice?
No. We didn’t contact with him.

Did Germany become more interested in you after the Belarusian success in Sochi?
No. We didn’t discuss that.

What astonished you most during your work in Belarus?
Cordiality, your fans’ warm-heartedness and the mass media’s high interest.

What are Klaus Siebert’s interests and hobbies?
I play golf with pleasure. Furthermore, I adore riding a motorbike, I have Triumph Street Triple R.

Will Darya Domracheva resolve her problems with rifle shooting?
I hope she’ll do it!

Who will top the overall standings in the World Cup?
Ha! I think the best sportswoman will do that.

Are you interested in the news from Belarus, or is it in the past?
We always contact with Belarusians. We discuss the recent events. Everything is of great interest for me.

Does anybody call you Zibych in Germany?
Oh, no. This nickname is only for Belarus. I’m called that way only in your country. In Germany I am just Zib.

You worked with national teams from East Germany, China, Belarus. Are there other countries in which you’d like to coach?
I can only say that all places where I had worked played a great role in my coaching career. I got new and useful experience in East Germany youth team in 1984-90, in the united German men team in 1998-2002, in Austria in 2002-05, in China in 2006-08, and finally in Belarus 2008-14.

Your best pupil is…
…Dasha. She’s an exceptional sportswoman. I had an opportunity to work with many top notch biathletes. Suffice it to say that my pupils got 39 World Championship and Olympic medals overall. We can recollect for instance Ricco Gross who became four-time Olympic champion.

Wolfgang Pichler said that he hadn’t managed to accustom to the quality of Russian roads. What didn’t you manage to accustom to in Belarus? What is still a mystery for you about Belarusian behaviour?
You know, I have a firm point of view – we should love our job. And it’s indispensible to get accustomed to the mindset peculiarities in any country you work in. We should find a certain approach to people; if there are any problems we are to resolve them together.

When you started working with Domracheva, did you realise at once the scale of her talent?
I always count on a fast progress. But on the other hand, the reality is that we need painstaking systematic work. It was a great honor to work with such a sportswoman as Dasha.

Did you get on well with the Belarusian biathlon federation management and the Belarusian Ministry of sport?
In the place where there’s intensive work it’s impossible to avoid some tensions. But I don’t think I have a right to evaluate the actions of the organizations mentioned above.

Doctors didn’t allow you to go to Sochi, to that emotional Olympic hot point. Why did you put your health to the second place after the Belarusian team?
Actually, doctors allowed me to go to the Olympic Games. The Belarusian sportswomen’s performance was my area of responsibility, that’s why I wanted to be with them, feeling the competitions’ atmosphere.

How do you draw courage and optimism fighting against your malady?
My family, friends and the life beauty help me.

Chemotherapy – is it painful?
It became a new experience for me, a new struggle… Telling the truth, it’s not easy.

Do the colleagues from Belarus help you after the contract’s finishing?
First of all, I get help from my family, friends and German doctors. But I also maintain contacts with some people from the Belarusian team, who are really important for me. In particular, with Dasha, Nadezhda Skardino and Fyodor Svoboda.

What would you like to wish and advice to your former pupils?
First of all, I wish EVERYONE BE HEALTHY! And of course I wish them sport success and great achievements in 2015.

Text and pictures by Pressball.by