For the first time in her career, Darya Domracheva will start the season as the absolute leader of the women’s biathlon. Perennial rivals called time on career and a Belarusian sportswoman is full of motivation, even though she had the enchanting previous season.  There is no doubt, Daria will do everything for achieving this task. It is two weeks before the start of the first race of the season 2014/15, so we are glad to recall main facts in Domracheva’s career.

Despite the total supremacy over many opponents in recent years, she tried the yellow jersey only once. She was an overall leader on December 3, 2012 at the sprint race in Ostersund. That became possible after phenomenal victory in the individual race a few days earlier. She achived fifth place in the sprint race and handed leadership to Magdalena Neuner who never parted with it until the end of the season.

Since spring of 2012 Daria won and seen a lot, she become triple Olympic champion and two-time world champion, has won three small crystal globe. However, all these was conquered with faulty shooting. She got to all the targets in 3 March, 2012 in Rupolding at the sprint individual race. However, even ideal shooting didn’t guarantee the victory, Magdalena Neuner won the race. After that, she shot differently. Domracheva closed all targets in the team race and individual competitions in the summer championships, but allowed one to nine misses in the individual races.

The number of podiums

Daria became legendary biathlete, not even reaching the age of 30. She has the greatest number of podiums in between active sportswomen. By the way, this is the seventh figure in history. She can even get to top-3, if she have a good season. She needs to be at the pedestal 11 times during World cup and World championship races.

Record holder of the prestigious ranking is Swede – Magdalena Forsberg, she has 87 podiums. Two Germans are also in top-3: Uschi Disl (74) and Kati Wilhelm (63).

Curiously, nobody can reach Darya’s positions this year, Olga Zayceva misses the season, while Kaisa Mäkäräinen has only 39 podiums. 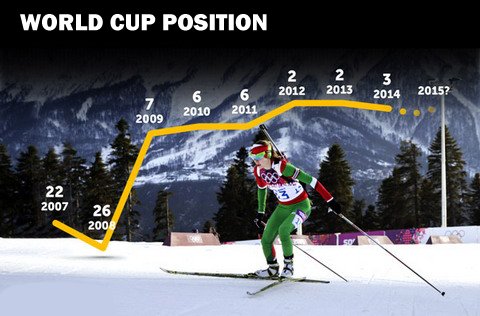 Darya Domracheva is named as a major pretender for the Big Crystal Globe for the fourth autumn in a row. Until now, extraneous forces changed the hopes of Belarusian fans. In 2012, Magdalena Neuner got the Globe (just 28 points ahead of Darya), year later – Tora Berger, and in 2014 International Biathlon Union decided that the Olympic race would not be included in the World Cup standings. As a result, Kaisa Mäkäräinen, who failured in Sochi won it in the previous season. It has been counted by IBU, that if Olympic race had been included to the overall rating, the previous season for Daria would have turned out to be triumphant. However, controversial decision of biathlon organization men could benefit not only Domracheva, but also the entire community of biathlonist. Big Crystal Globe is great motivation for Belarusian in usually “dead”, post-Olympic season.

This season, the three-time world champion will start in a red shirt at least once – in the first season mass-start on January 11, 2015.

In the season of 2011/12 Domracheva had an incredible series of nine podiums in a row! Successful segment lasted from January to March 2012 (2-3-4). She was in top 3 in every race during the three stages of the World Cup, and continued at the world championships. Nevertheless, Darya is not alone with this outstanding achievement. In the season-2009/10 Magdalena Neuner did this (3-3-3) from December 2009 to February 2010. She stopped at the Vancouver Olympics only. But we have to notice that Daria held all the successful race non-stop, while Magdalena wasn’t on start 2 times.