The birthday of national cinema is considered to be 17th December, 1924. This day was marked by Resolution of the Council of People’s Commissars of the BSSR, according to which Belarusian State Office for Film and photography was established. According to the memorandum to Gosplan (from Russian: Госплан) or the State Planning Committee a range of commercial, political and educative objectives were imputed to the newly created film industry. Thus almost nothing has changed regarding requirements and objectives during this fairly long period of time.

Originally filmmaking worked only with chronicles and popular-science films. In 1928 a new feature film studio “Soviet Belarus” was formed in Leningrad (present day Saint Petersburg). By the summer of 1939 the core team including creative and engineering personnel of Belarusian feature filmmaking moved to Minsk. Though not for long, when the war began the creative staff of Belarusian cinematography had to settle in Almaty. Moreover Belarusfilm dates back to 1946. 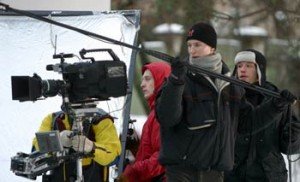 The first Belarusian feature film “Forest story” was created by director Yuri Tarich in 1926. But the most famous works of national cinema were connected with the Great Patriotic War. These works are “Constantine Zaslonov” (USSR State Prize in 1950), “The Clock Stopped at Midnight”, “The Third Rocket”, “Alpine Ballad”, “I Came from the Childhood”, “Come and See”, written by  Ales Adamovich and created by Elem Klimov to commemorate the 40th anniversary of the Soviet victory in World War II and many other films. A Belarusian movie “Through the cemetery” directed by Viktor Turov was included in the top 100 of the most significant films about World War II in the world which was made up in 1995 by UNESCO to commemorate 50th anniversary of the victory in World War II.

“Belarusian cinema has everything to develop and to stay as good as it was in the past decades” admitted Anatoly Tozik, the Deputy Prime Minister of the Republic of Belarus, on the 17th of December at the solemn meeting, devoted to the 90th anniversary of the Belarusian cinema. The previous day the direction of this development was under consideration on the board of the Ministry of Culture, where the draft of development strategy of the national film industry was discussed. The document is planned to be revised and submitted to the government at the beginning of the next year.

However, for Boris Svetlov, the Minister of Culture, it is difficult to say whom this industry is working for. According to him, Belarusian cinema continues to serve only for the domestic market, wherein it occupies a negligible share of films in cinemas and on the national TV channels.

A great amount of films are made by Belarusfilm. “According to the December 1, 2014 data, the film studio moved to the break-even operation” said  Oleg Silvanovich, the head of the film studio, on the 15th of  December. “The profit we have nowadays is about 2 billion BYR (Belarusian ruble). The revenue from film sales from January to November made up almost 22 billion BYR, and 18 billion BYR for the whole 2013”. However for the National Film Studio “Belarusfilm” 10 months of 2014 were unprofitable and the prospects for the beginning of the next year are not quite bright.

A low demand on non-fiction and animated films was noticed. Return rate of budgetary funds invested in the creation of feature films, released in 2011, for the past three years of active demand made up about 45%, whereas for the non-fiction and animated films it was 8,6% and 0,5% respectively. According to Minister’s words, a co-production, on which the film studio relies in recent years, develops not always in favor of Belarusian cinematography.

Among non-state cinematographic organizations was marked private enterprise “Nonstop MEDIA”, limited liability company “Film Company New Wave Production”, unitary enterprise “Studio of St. John the Warrior” and limited liability company “Pervaya Kinovideocompaniya”. All organizations performed 1-3 cinema projects on the competition basis using budgetary funds.  However, according to Minister’s words, it is early to say about significant demand or about financial efficiency of such products. Thus in 2013 and 2014 19,5 billion BYR were allocated from the state budget for private filmmaking companies and 42,4 million BYR  or 0,22% returned to budget afterwards.

Thus, preserving the objective to increase the efficiency of state support, film studio Belarusfilm as well as other private organizations should await tougher competition requirements and stricter control of allocated budget funds.

And a viewer is already quite accustomed to wait for the new cinematic “achievements”. So a new sensational national project “We, Brothers”, originally called “Abel” and created by the private enterprise “Nonstop MEDIA”, is supposed to be released in April. Vasily Koktysh, the head of the unitary enterprise “Kinovideoprokat” informs that Belarusian premiere of the film is going to be on the 18th of April at the same time with the world one.

In its turn “Belarusfilm” announced its new cinema project. “We have a project of 12-series movie which we are going to release in co-production with Chinese cinematographers. There is a story about a daughter of marshal, who lived in Mao Zedong age. This girl studied at the international school in Moscow and when children went to Belarus to have a rest the war started. The girl appeared in a Nazi concentration camp. People tried to pull her out, to salvage her. This is a well-known historical fact” shared with journalists Oleg Silvanovich. So there is fusion of a glorious for Belarusfilm military topic with actively implementing co-production on which they rely nowadays. As they say, traditions and modernity.

Lilia Solomenkova is a fourth year student at MSLU at the faculty of Intercultural communications. Before that she studied at the linguistic college and graduated from it with flying colors. She is a creative, diligent and punctual person with a wide range of interests.
Contact: Website