Turning the pages: The History of a Primeval Forest

Today we invite you to take a trip, 340 km (200 miles) southwest from the capital city of Minsk. At the end of our journey we will step into the place where one can learn the difference between Polish and Belarusian aurochs nicknames, the number of beasts killed by Tsar Alexander II during the Belovezhskaya Hunting and meet the great diversity of animals.

The history of Belovezhskaya Pushcha began in the end of 14th century. Jogaila, the prince of Grand Duchy of Lithuania, announced this territory reserved and banned hunting here. Two centuries later his successors also prohibited lumbering in this sacred place, thus the Pushcha became completely protected. Only wars that took place on Belarusian territory inevitably harmed the Reserved Forest. In 1939 Belovezhskaya Pushcha finally designated a status of State Reserve.

Today the Nature Museum is a popular destination for Belarusian and foreign tourists. Every year it opens its doors to over 100,000 visitors from all over the world. In 2009, in honor of 600th birthday of Pushcha’s reservation mode, the exhibitions moved into a new Environmental Education Center that was built.

At the beginning of the exhibition you will be greeted by auroch. “It’s an exact copy of Puginal, a Polish auroch, the forefather of the current Belarusian aurochs”, – says our guide and museum director Ludmila Grechanik. The point is that the last Belarusian auroch was killed on 12 April 1919 by local forester. For thirty years Belovezhskaya Pushcha was entirely aurochs-less. Until 1946, when five Polish aurochs, Puf, Pulya, Pustosh, Purpura and Puginal, came from Poland to found a new strain of Belarusian aurochs. 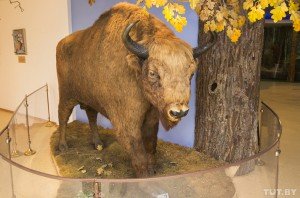 A curious fact: every nation which is home to an auroch has its own particular first letters for naming newborn animals. The Polish nursery located in Belovezhskaya Pushcha gives its aurochs names that start with “Po” or “Pu”, while Belarusian aurochs names start with “Ba” or “Be”.

From the first people to wolverine

After meeting with Puginal we enter an exhibit hall where we find on display a marvelous collection of ancient stone products, ceramics, and ironwork. All artifacts were found in the course of archaeological excavations conducted in the forest; all of them demonstrate what life was like in 8000-5000 BC for the earliest inhabitants of the primeval forest.

Aurochs and ancient implements are not the only celebrities in the Pushcha. Scarecrows of wild horses and tarpans, their forefathers, bears, bulls and deers allegedly transfer visitors into their era. Our guide has a magnificent story about every animal living here: “Tarpans (a species of wild Eurasian horse) were a huge problem for local farmers every year consuming the harvest”. But as is well-known, every problem can be turned into an opportunity: people tamed tarpans and these fierce horses fought valiantly in the famous medieval battle of Grunwald in which the Teutonic Knights from the west were soundly defeated.

Massive and strong bulls gave up its life in 1627. Our guide continues to open unknown pages of Pushcha history: “We have only a few engravings and descriptions about this delightful animal. The aggressive bull, as opposed to the calm and rather gentle auroch could be dangerous for people. That’s why today some experts consider that the bull, not the auroch was the character featured in Gusovsky’s famous “Song about a Bison”. 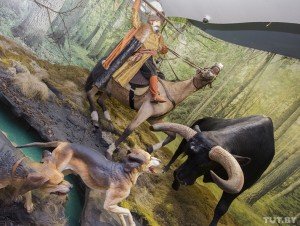 In the Museum’s rendering of the forest edge, stands a graceful deer, listening for the slightest sound of an approaching predator. “In former times there was a distinct subspecies called “Belovezhsky deer”, which sadly became extinct during the era of Polish rule. In later years, Russians came to power in this area, and introduced into the sacred forest the European Red Deer,” — explains our guide.

A great tree in the middle of the showhall serves as a home for yet another special animal that unfortunately became extinct. The last wolverine disappeared from the Pushcha in the 17th century, and the prototype for the scarecrow came from Arkhangelsk region. 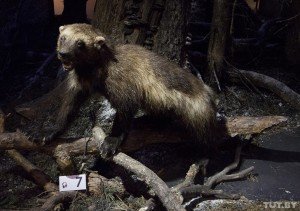 The corridor connecting 1st and 2nd showhalls is an important area of exhibition also. Beautiful pictures hung along each wall represent The Royal Hunt. For three long weeks in October, 1860, 90 guards, 2,000 peasants and countless foresters drove every animal they found into a fenced portion of the Pushcha for Alexander II and his fellow hunters.

The hunting protocol records the slaughter: “In two hours on the hunt’s first day there were 44 creatures (including 16 aurochs) slain. The Tsar personally shooting 22 animals: 12 aurochs, 3 wild boars, and 7 other ones. <…> On the second day, of the 52 animals killed, the emperor personally killed 21.”

In 1862, two years later, the Tsar’s servants erecred a statue of an enormous auroch to honor The Great Hunt, and thumbnail replicas of the statue were made to the huntsmen. Few years ago one of small auroch came back to the Nature Museum from Hermitage. 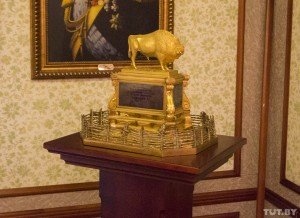 A thumbnail replica of the auroch’s statue

Behind a fence in the Museum is a model of the beautiful Belovezhsky Palace, built in 1889-1894, but strongly damaged beyond repair during the Great Patriotic War. Fifteen years after the war, the sad ruins were finally demolished.

The second largest showhall in the Museum displays “The seasons” exhibition about animals of the present forest: wolves, wild boars, hares, the lynx and the badger. Here one can also learn seasonal characteristics of the forest. 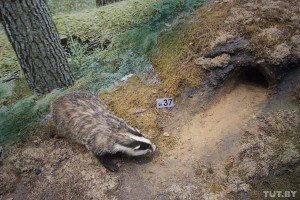 The badger is a wonderfully clean little beast, so tidy that he replaces his burrow’s “carpet” of leaves and twigs every spring and every autumn. The badger pays most careful attention to the creation and maintenance of his burrow, carefully choosing the proper foliage with which to line it, and permitting no unwanted objects to intrude into his home. One day, while inspecting animal habitats, a young naturalist unintentionally dropped his spectacle-case into a badger’s burrow. The next day a museum worker returned to the area and noticed that the badger has set the spectacle-case neatly outside the burrow’s entrance. 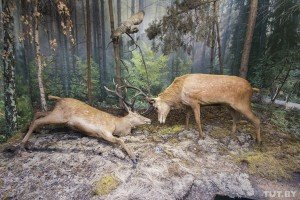 Two deers on the next stand rammed their antlers more than 50 years ago. This couple also has its own story: “When they were found, one deer was dead, the other nearly so, from hunger and exhaustion brought on by trying to haul the remains of his antagonist. The suffering creature was killed and from the entangled horns, the scarecrow shown in the display was created.”

The third showhall depicts aquatic inhabitants and marsh dwellers. In the center of the room is located an ancient oak whose branches are populated by diverse bird species, and whose imposing roots are replete with little “jumping” rodents. “The oak is considered as the Pushcha symbol. Being aged, he shelters every forest creature, feeding and protecting them,” — says our guide. 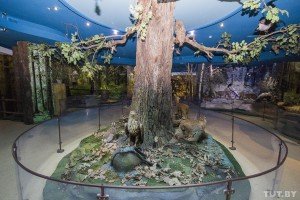 Near the ancient oak one can find the hoopoe scarecrow. Such unusual English and scientific names (lat. Upupa epops) was given because of his singing. According to one version the hoopoe is a close relative of the hornbill.

Our tour comes to an end. The way back to Puginal is full of photographs depicting major historical events in Belovezhskaya Pushcha. The pictures of Polish aurochs arriving Pushcha, Belovezhskaya agreement signing, and students working in the Forest, turn the last pages of our little journey.

A lot of other stories are waiting to be told in Belovezhskaya Pushcha Nature Museum! 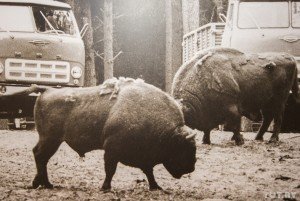 The aurochs – the main propetry of Belovezhskaya pushcha

*all prices in BYR