So called “Stalin Line”, 25 km north from Minsk, is one of the most popular open air monuments in Belarus. There are many myths and legends about it but now we tell true story about what had happened here before and during the Second World War.

The Stalin Line is probably the most famous museum complex of Belarus in the open air. Thousands of people from around the country come here to see reconstruction of battles, military machines and trenches with their own eyes as well as to have a drink and a snack in the café, and  bang with no-load arms meantime. However, the main museum theme often remains a backdrop or is left behind the curtains.

Primarily in 30s Stalin line was intended precisely as a museum of Soviet fortification and erected on a large scale at the western USSR border. Two completely restored machine gun bankers (MGB) that are included in Minsk fortified region, present special interest to history enthusiasts. In total there were 326 structures erected in the fortified region outside Minsk, each of them suffered different fate: only 6 fortifications were reasonably restored and assigned to three different museums complexes, other 320 were completely forgotten, abandoned and turned into scrap heaps. How did the genuine Stalin line look like and how does it look like now 80 years later? We will study the history of construction and oblivion of the largest fortification system in Belarus in the case of Minsk fortified region.

The very term “Stalin line” was created by western journalists in the Inter-War period. This name had never been used in the USSR, on the whole construction of the large-scale fortification line was in no way displayed. New fortifications were made as a bound system of machine gun bankers (MGBs) and various pioneer works stretching from the Karelian Isthmus to the Black Sea. 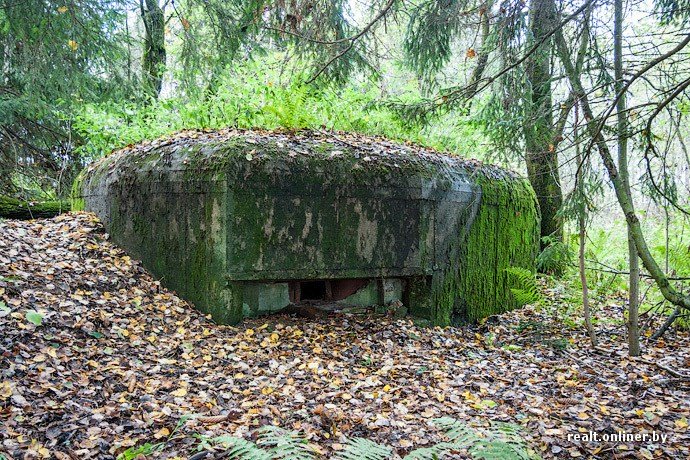 Minsk fortified region was being built between 1932 and 1935. On the territory of Belarus it came third after Polotsk and Mozyr fortified regions. There are no prizes for guessing that Minsk fortified region played an important strategic role in terms of defense: it was assigned to provide defense for the capital of BSSR and protect the shortest route from the west towards Moscow. It’s worth mentioning that main function of the fortified regions of those times was to dominate border regions until major forces mobilization, not to arrest the advance of the enemy forces and defeat them as it is often mistakenly supposed. Construction of the fortified region was carried out in hard conditions. The country was close to collapse. There was massive shortage of funds, transportation, building materials and staff. Alongside with the fortification erection emergency infrastructure was being constructed: roads, barracks, warehouses etc. 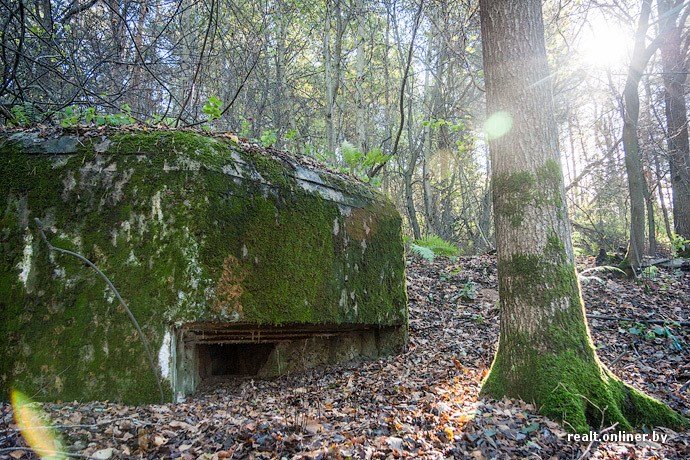 Typical for that time gun shelters were put up in the fortified region: machine gun and artillery posts. However as fire areas differed depending on the firing port, all structures had their own specific peculiarities and differences. Although all the fortifications of Minsk region look almost alike, it is hard to find two absolutely similar MGBs.

Vileyka, Vishnevo and Molodzechno were considered principal directions under protection of Minsk fortified region in the thirties. Baranovichy direction must have been thought of as secondary. Within the fortified zone there were no large natural barriers, however, there were numerous water-logged areas and that was important for design and development.

Basically immediately after the construction it became clear that for the fast-changing world the existing fortified region was out-of-date and required urgent modernization. In the first place artillery reinforcement had to be considered. In 1936 a second priority project plan for major reinforcement of Minsk region was started. By the fall of 1939 34 new artillery half-caponiers had been started but their construction was never finished. Reinforcement project plan was not destined to be implemented as in September 1939 Germany and USSR invaded Poland and consequently the USSR border had been shifted to the west. 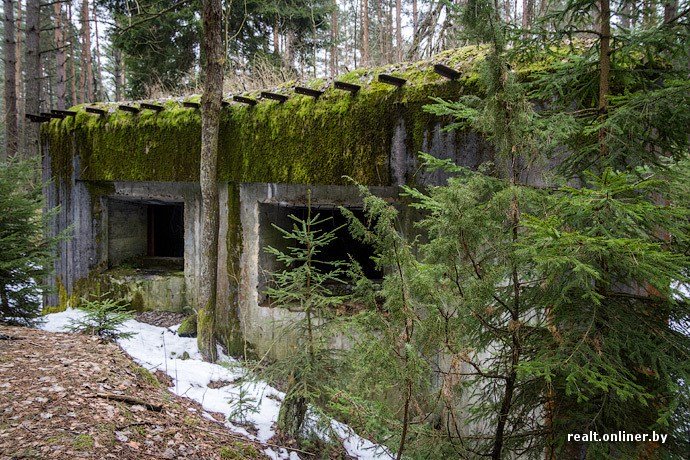 Events related to the shifting of the state border had changed defensive assignment of Minsk region and later its factual conservation order was signed. The fortified region witnessed the beginning of the Great Patriotic War in such condition. 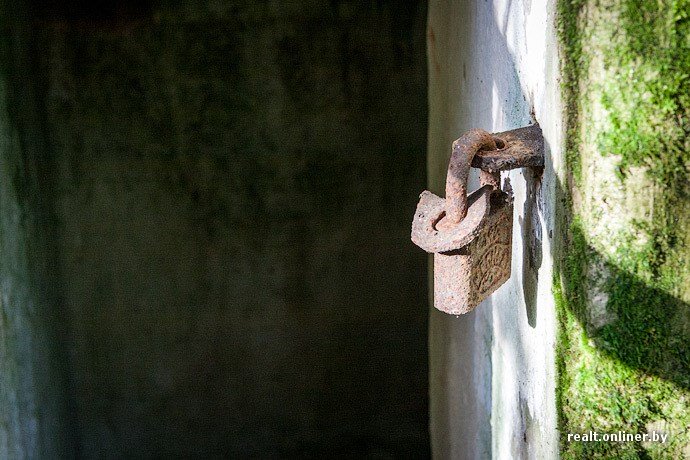 Machine gun bankers constituted a majority of Minsk region fortifications. They were divided into several main types depending on a protection class and a number of firing ports. Gun posts differed in classes of shell hit resistance. Resistance of majority of fortifications was calculated upon 203-millimeter shell hitting in Molodechno and Baranovichy directions and 152- and 122-millimeter in all other directions. The walls of the most solid fortifications were 1,5 mm wide, the covering was 1,1 mm thick. Accordingly, the potential enemy of that time –Poland – simply didn’t have any arms to destroy such fortifications. It was only in 1936 that the Polish army was outfitted with 220-millimeter mortar guns. 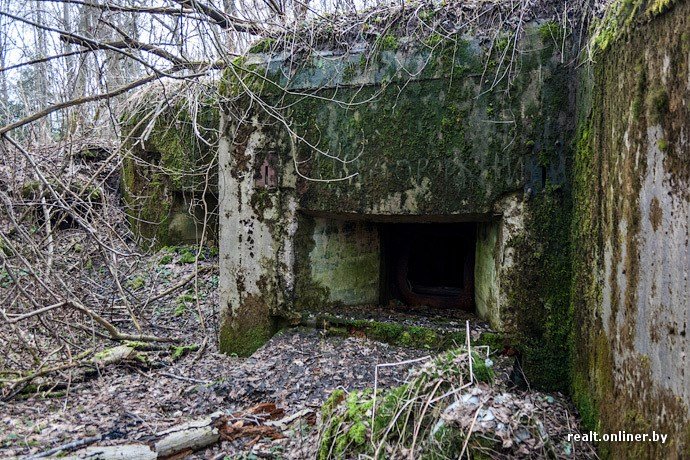 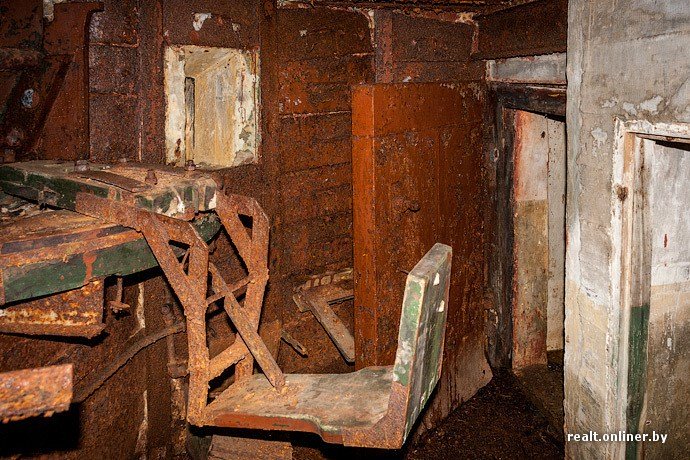 Practically all machine gun bankers are one-storeyed, but there is also a specific type of two-storeyed structures. As a rule such bankers at the same time served as observation posts. 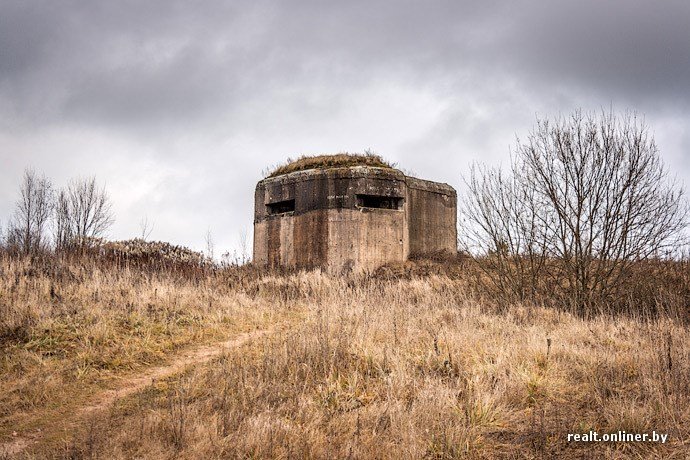 A garrison of a single-storeyed machine gun banker accounted for 10-12 soldiers, a two-storeyed banker had up to 20 combatants. It’s easy to imagine how little space there was inside. Even the additional underground storey didn’t provide needed comfort.

Artillery machine gun bankers, or to be more correct, half-caponiers had two firing ports. They were outfitted with 76-millimeter cannons of 1902 pattern on a caponier gun-carriage.

Another fortification type – countertank gun posts with tank T-26 turret. In total 9 fortifications of such type were constructed. There was a 45-millimeter cannon and a machine gun in service. 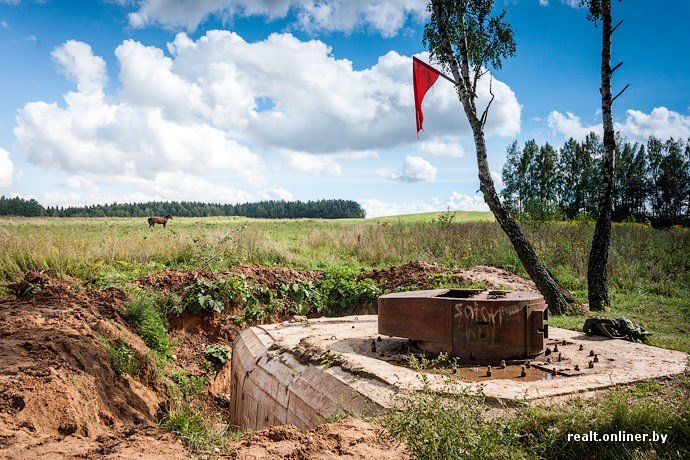 Special attention should be paid to the well-preserved artifacts of the past centuries. In different gun shelters some writings of the soldiers who served here can be seen. Some of them were restored in the complex the Stalin line. 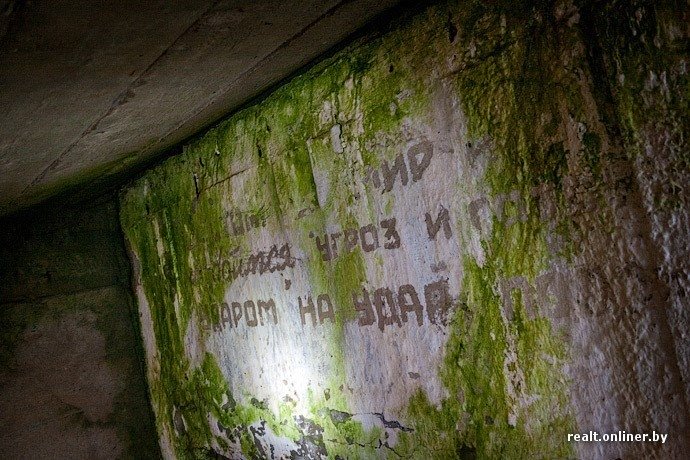 «We sue for peace. We are not afraid of threats and will fight fire with fire. We will answer back to the war-mongers» 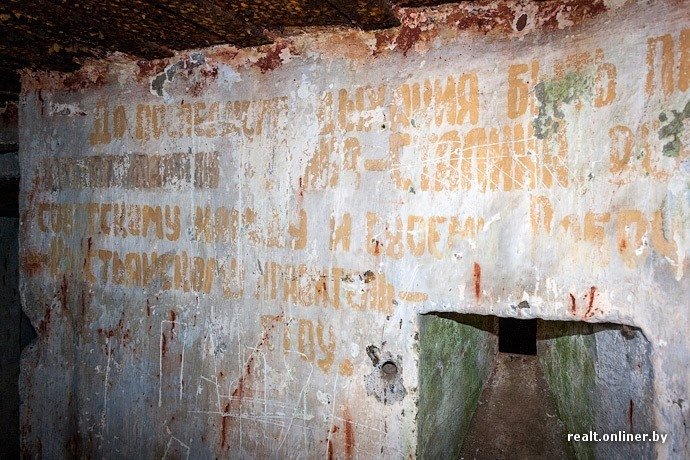 “To be faithful till the last breath to the party of Lenin-Stalin, all Soviet people and own workers’ and peasants’ government» 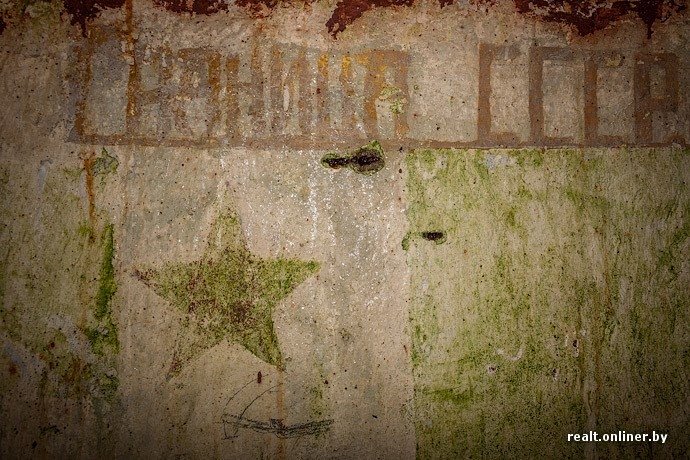 «The USSR border is sacred and inviolable»

In the times of German occupation a special program on fortification destruction was in force. As a result the whole the northern face of Minsk fortified region had been destroyed. However, due to the excessive use of explosives which were insufficient at the front, German field engineers scaled down this work. 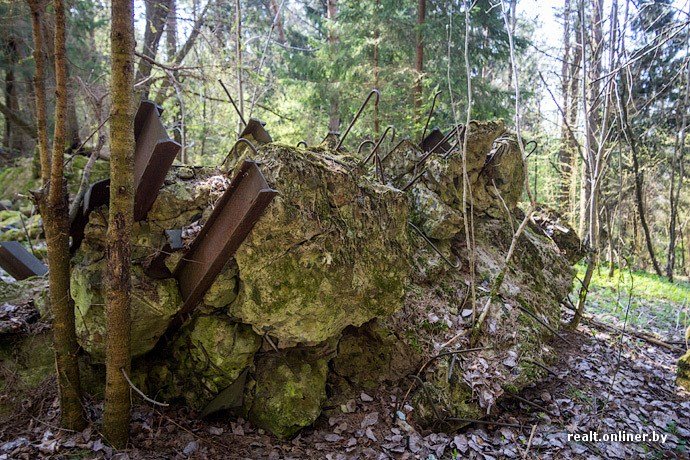 At present the condition of many gun shelters of Minsk region is horrible. Constructions next to summer cottages and gardening associations were turned into piles of rubbish, a lot of machine gun bankers were dumped into open pits at sand recovery, some are being used as construction footing. 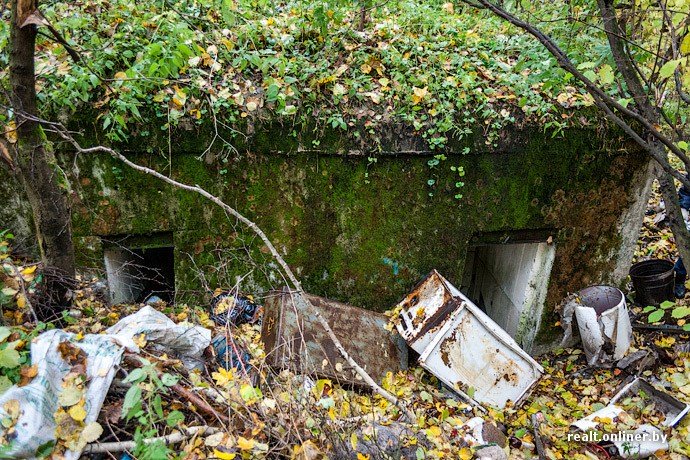 Often one can hear a traditional misconception that the Stalin line and Minsk fortified region in particular are a myth, that they were of no importance during the city defense in the summer of 1941 and their purpose and function are inconceivable. Let us sort it out.

Firstly, the fortified region was meant to blunt the enemy’s drive and provide major forces’ mobilization but not to confront the enemy. Secondly, Minsk fortified region in particular was not planned and constructed to fight Germans back. At the time of fortifications’ erection around Minsk in the thirties the principal enemy was Poland. Besides, by the beginning of the Great Patriotic War Minsk region had been out-of-date and required modernization, let alone the fact that at the time of German attack it was in “mothball” and unfit for action condition.

Did Minsk fortified region commit Minsk defense? Yes, it did. Did it complete its war assignment? No, it didn’t, as by the beginning of the war it hadn’t been a fully equipped operational system. Machine gun banker defense around Minsk could be characterized as discontinuous and rather disastrous. However, a lot of constructions wear quite noticeable damages which proves strong resistance.

A vivid example of Minsk region involvement in defense is a four-piece caponier №06 at village Matski. It’s the biggest construction of Minsk fortified region which held German tanks on Minsk fringes for 3 weeks. The caponier was equipped with four 76-millimeter cannon of 1902 pattern (two on each side). The fortification garrison had 22 soldiers. Battles at the machine gun banker commenced on 26 June 1941, on the fifth day of the war. According to the witness of the events in June, the armored plate, covering the firing port, was damaged. Then a German missile hit the unprotected firing port, as a result the arms were destroyed and the loader together with the gun-layer were killed. The battle ended on 28 June when Minsk had already been taken. The machine gun banker garrison was out of everything: arms, water, food. There was no communication, the ventilation system was out of order, the arms became useless. The garrison had to leave the banker. At the end of the battle several tanks and armored vehicles were destroyed. 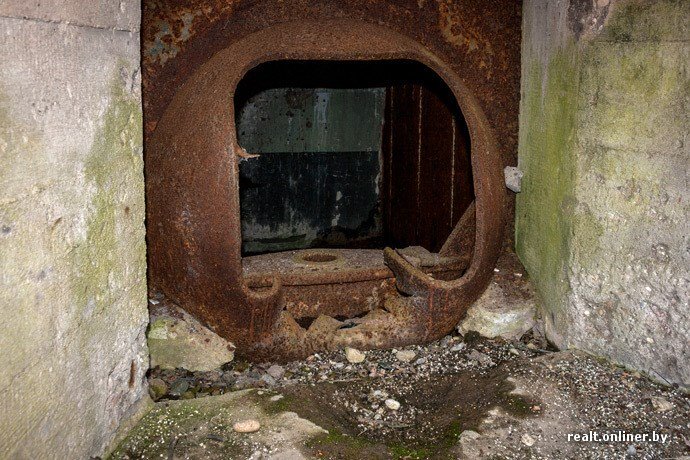 Obvious combat damages can be seen on the half-caponier №02 at village Zhuki. There are shell holes above the firing ports and on the fender; inside the fortification the major plate of the casemate artillery cannon is pierced.

Machine gun banker №159 is known for its significant role in the defense battle. The construction was attacked by a German assault force. The gun shelter suffered a frontal attack, the firing ports were neutralized with the use of a Bangalore (the name of an explosive fixed on a long pole). Curved flange beams on one of the firing ports immediately catch one’s eye – cause of the focused blast. Gun port junctions are significantly damaged. Inside effects of the explosion can be seen all around. There is an explosion-cast door on the floor. All the walls are scarred with shatters.

There are numerous traces of the impact at banker №271. Until recently there has been an armor piercer in the antiricochet shoulder of the firing port. 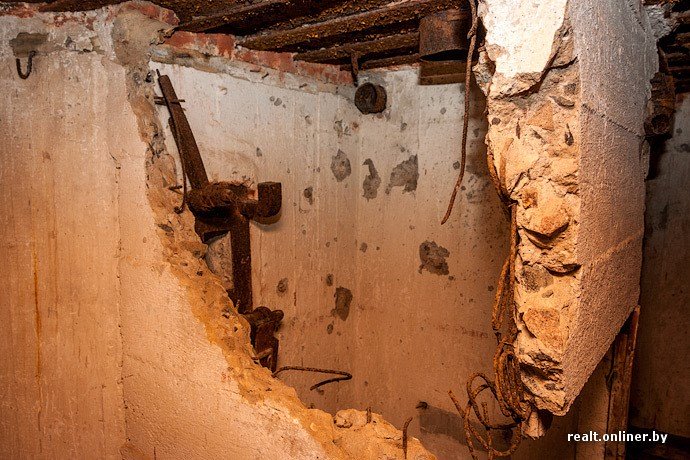 In some several dozens of gun shelters one can discover effects of high-intensity battles – shell holes, bullet and shatters fractures and so on. It proves that in June 1941 Minsk fortified region showed strong resistance. Unfortunately, we can’t stress the significant role of Minsk region as an effective unit. 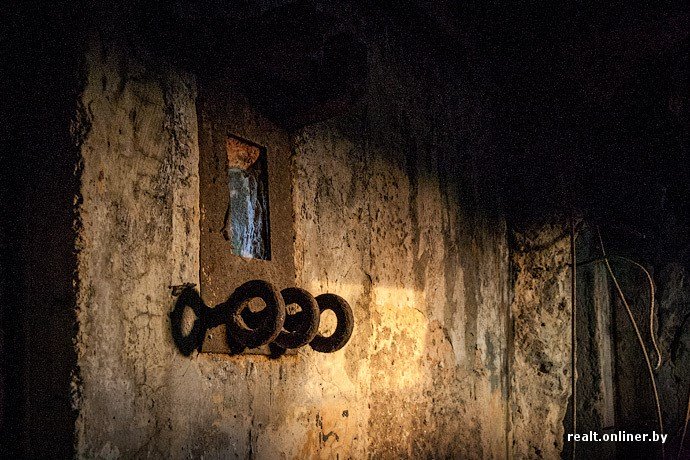 Today Minsk fortified region, a unique fortification monument of the beginning of the ХХ century, is abandoned and forgotten. Some independent enthusiasts do researches and collect information on the Stalin line. Sadly, it is hardly possible to protect all fortification constructions from vandals.