After a success in Seoul, Aliaksandra Sasnovich reached the Top-100 of the WTA rankings for the second time in her career

At the Korea Open Tennis, the Belarusian No.3 advanced to the final, where she lost to Irina-Camelia Begu of Romania – 3-6, 1-6.

Aliaksandra then arrived in Minsk for a week to recover and prepare for the tournament in Linz (Austria). The Belarusian tennis player managed to find some time to talk to journalists about her first WTA final. After such an optimistic conversation, it became clear 21-old Sasnovich will have a great career in tennis.

– What are your plans for autumn?

– Before the end of the year, I want to take part in three tournaments: in Linz, the Kremlin Cup (Moscow), and Poitiers (France). I need to get points to advance to the main draw of the Australian Open next year, because three qualifying rounds are completely exhausting. No one wants to lose in the qualification! In the main draw players do not fight so fiercely as in qualifying rounds.

– Tell us about the most successful tournament in your career, about the Korean Open.

– I came to Seoul quite late, acclimatization was ok. But on the third day of qualification I had to call for a doctor on the court, as I felt to be under the weather. Everyone thought I would withdraw, but I managed to clinch a victory in the match to reach the main draw. Although I didn’t face tough opponents in the qualification, I had to work hard in every match. After each victory, we stayed on the court with my coach to improve some elements. 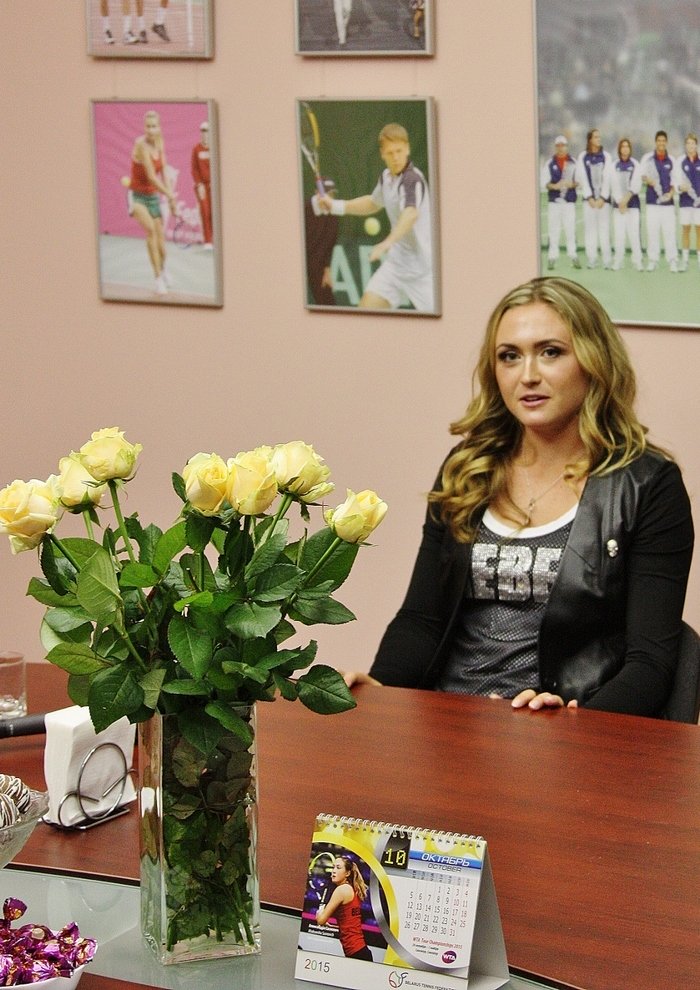 In the first round of the main draw, I met Alexandra Dulgheru of Romania. We played earlier, but I have never beaten her before the match in Seoul. I knew her way of playing, I had a plan and it worked. Then, I had a second-round meeting against Magdalena Rybarikova of Slovakia. She has a great service, but I stayed focused. In the third round, I took on Sloane Stephens of the USA. Few people believed in my victory, but I was so confident, that I didn’t think about a defeat. I had a goal – to take the court and show everything I could. I did it! After that match, I felt the pain in my left leg. I played the semi-final against Anna-Karolina Schmiedlova of Slovakia with a discomfort in the leg. But I had such a strong desire to stun her! I believe I dismissed her thanks to my determination.

I was physically exhausted before the final. It was really hard to compete against Begu, she made few errors. But I can not blame myself, because I did the utmost, trying to defeat her. Of course, I was upset. I planned to win! I fought for every ball. And I’m not ashamed. 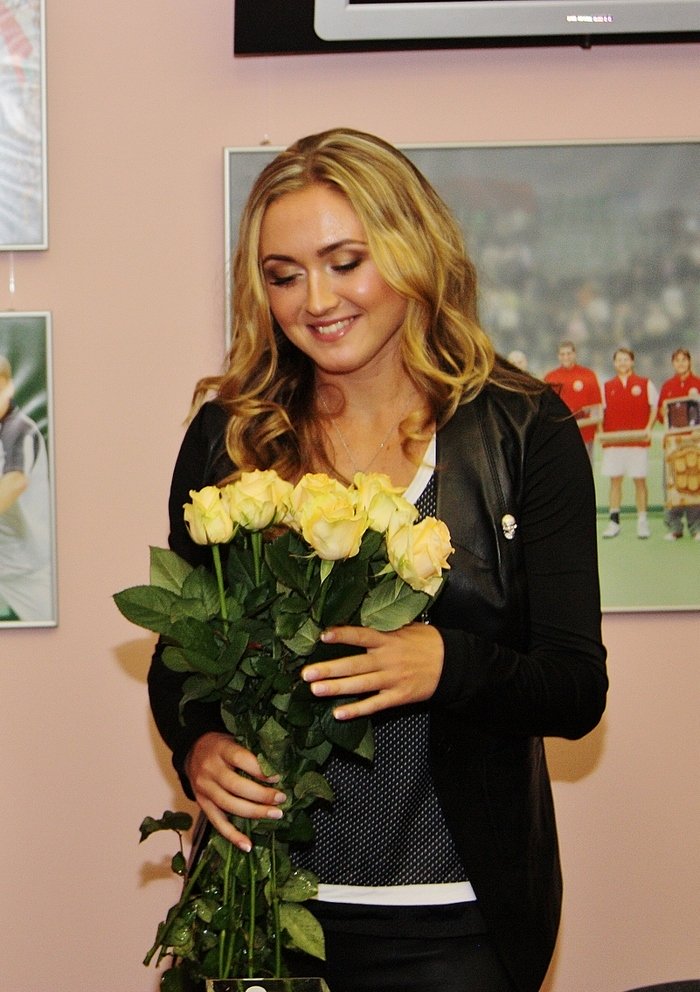 – In the main draw, you knocked out four opponents who had a higher ranking. When did you realize that everyone became focused before playing against you, not considering you “another girl from the qualifying round”?

– They knew me before that, too. Dulgheru remembered me, as we played previously, but I doubt Rybarikova and Stephens knew anything about me. I did not notice a different attitude; I just tried to concentrate as much as possible and did what I had to do. My good physical shape helped me a lot.

After changing a coach, my tennis has changed, too. Earlier, I was bad psychologically and I lost in difficult situations. Now I’m much more confident.

– Tell us about your new coach…

– I have worked with Alexander Lenyuchev since July. He has helped me a lot. He made me change the understanding of tennis and the world. He is very wise. With Alexander, I began improving my weakest elements, the thing I have never made earlier.

– After Seoul, you went to Tashkent. You played one match and then were forced to pull out due to injury. How was the trip?

– The trip took the whole day. We arrived in the hotel on Monday evening and on Tuesday at 3 p.m. I had the first match. I was lucky I didn’t have to acclimatize. In my opener, I faced No.3 seeded Polona Hercog of Slovenia, and I was not happy about that. But I had to fight. Again, I was forced to be strong mentally. After losing the first set, it was very difficult. I tried not to show I was not okay. Hercog was really nervous; I was not an easy player for her. I promised to compete till the end. I was ready to be taken off on a stretcher, but I didn’t want to lose. Being honest, I should not be ashamed.

After the match, I could hardly leave the court, I felt the pain and I couldn’t get off the bench. My coach helped me. Usually, I do not let anyone carry my bag for racquets. This is my stuff; I like to carry it myself. But that time, I had to give the bag to the coach, as I could not walk and hopped along.

– You are talking about this, as if it were something really funny…

– It’s all in the past, now I live in the present. I have certain objectives; I clearly know what I want. I desire to begin with the tournament in Linz. You know, I’m not chasing points. I adore to play, competing on the court, and living on the court. Each opponent is unique, and it is necessary to find keys for the win, to find her weak spots. I love the process of playing!

– Tell us about your goals…

– Are you going to play in Fed Cup against Canada in February?

– I would like to! I hope I will be invited. Everyone dreams about playing in Fed Cup. First of all, you play for the country, which gives unforgettable emotions. I will fight as long as it’s necessary.

– Do you have any chances to qualify for the Olympic Games in Rio de Janeiro?

– The selection for the Olympics will be held according to the ranking standings after Roland Garros. Anyway, I have a goal to compete in Rio. I should be ranked somewhere No.65-70. I’m working on it; I do not take things easy, and I will strive to qualify for the Olympics.

– With whom would you like to play mixed doubles?

– Max Mirnyi is an ideal partner. But it would be nice to talk to John McRoy and play with him. I believe it would be comfortable for me to work with him.

-I’m fond of watching Roger Federer’s matches. I’m always looking for his videos in Youtube. Men can show many useful things. Their way of playing and behaving on the court is completely different, including mentality, technique, and understanding of the game. I think many women follow them.

– You talk much about mentality and motivation. How do you strengthen your motivation?

– I think I haven’t showed everything I can do, but I already know that tennis is my life. I can not imagine myself to be out of the game. Previously, I took tennis easier, and I doubted whether I want to deal with it in future. Just six months ago, I realized that I wanted to be here, because that’s the right place for me. I put my heart into tennis, I appreciate the people who help me, and we are doing well. I am very lucky to have such a marvellous environment; I’m surrounded by kind and helpful people. Thanks to them!

– The team includes my coach Alexander Lenyuchev, physician Yuri Moiseyevich, my dad (the manager), mother, grandmother, who watches every match, my sister. And other people who are nearby to help; they are many.

– Do you have any friends in WTA?

– Friendship is such a thing… In tennis, I have friends and acquaintances. My good friend is a girl from Latvia, Diana Marcinkevica. Among others are Russian Liza Kulichkova, Belarusian Lidia Morozova and Ilona Kremen. I try to get on well with everyone. But friendship in sport is a relative thing. Today you are friends and tomorrow you are to play against each other.

– When a healthy and an injured player meet, for whom it’s more difficult to compete? You know, the healthy one is forced to fight against a vulnerable rival…

– I’ve been in both situations. It’s not so easy to see how the opponent is suffering and trying to cope with the injury. In those moments, I tried to think about my game. But the last time, in Tashkent, when I had problems with my leg, I understood Polona had some inconveniences while playing against me. At the same time, I had more desire and motivation to continue fighting. I understood that 30 points were gold for me. The coach then said I was on the edge of giving up. But I survived.

Poor my coach is! I even can’t imagine what he felt looking at my suffering. A nightmare! And what if my family watched that! Many relatives follow my games, looking at the online scoring, without a video, and they can’t imagine what is happening on the court! It’s really hard for my grandmother. I’m worried about her. All my matches are intense; they are like real thrillers. I often forbid my family to watch me play. 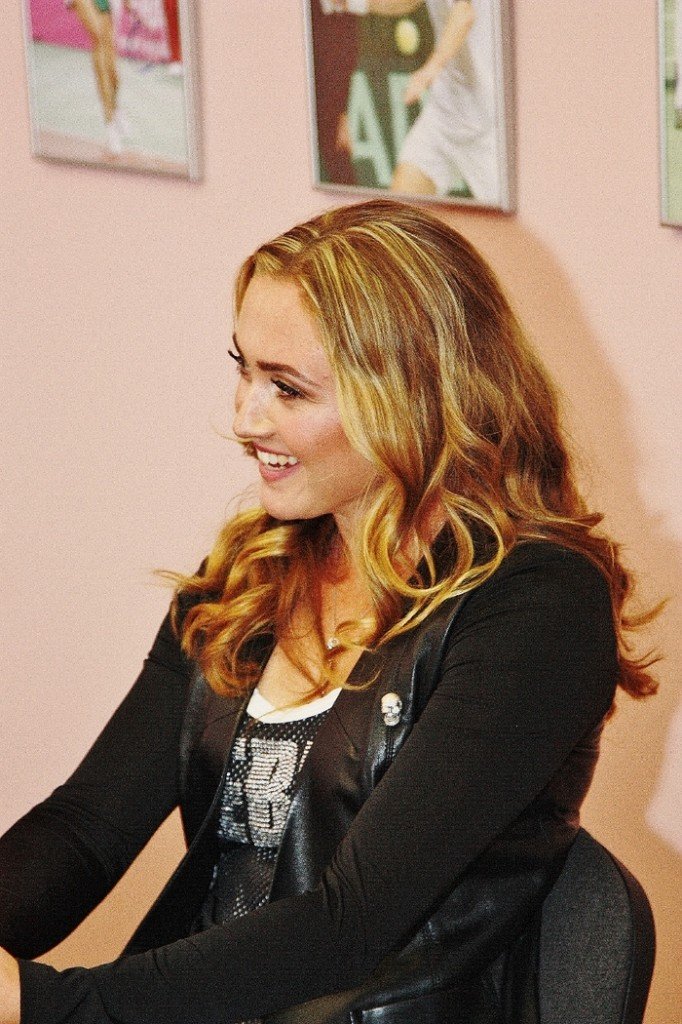 – Do you perform any rituals before appearing on the court?

– My mascot is a tomato. Sorry, I did not bring it with me, you would like it. It is funny, made of clay. I bought it in France a year ago, and now I carry it all the time. I go through some special rituals with my dad, as he wishes me good luck in an interesting way.

– What are your hobbies?

– When I have some spare time, I walk, meet friends, and chat with my grandmother. I like going for a stroll to see the city. My coach loves walking in the mountains. One day he took me with him, I liked it, and now we climb the mountains together. The first trip took about four hours; we spent two hours climbing up and two hours climbing down. We came late, after the match, it was getting dark, and the weather was getting worse. It lightened, thundered, and there was nobody nearby. It was a stressful trip, but, at the same time, a great one.

– Tennis players are always asked about prize money. How did you spend your first money got?