The crisis in Ukraine, and the resulting economic sanctions imposed by the West on Russia, has made this a terrible year not just for Russian automobile manufacturers, but Belarusian manufacturers as well.

Until recently, automakers were particularly bullish on entering the new Eurasian Customs Union market through Belarus. In the last week of September, Prime Minister Mikhail Myasnikovich met at the Belarusian-American Investment Forum in New York with the heads of the world’s largest automobile corporations – America’s General Motors (GM) and China’s fast-growing Zhejiang Geely Holding Group. Myasnikovich worked with GM’s leadership to develop a general approach to creating capacity for the production of GM cars at Belarusian factories. “We have agreed on a phased establishment of these facilities, in accordance with the arrangements of both the Eurasian Customs Union and the Eurasian Economic Community (EAEC), to reach a level of local production of 30 percent by Jan. 1, 2017, and 50 percent or more by July 1, 2018,” he said. 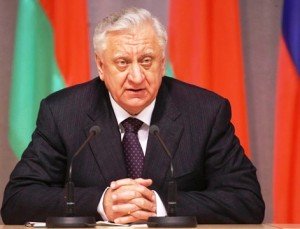 The prime minister said that the goal was to reach 20-25,000 cars produced at GM’s Belarus assembly lines each year. “Since GM has certain production capacity already in Eastern Europe and the Russian Federation, we will not duplicate these lineups,” he said. “Their company’s management has said that Belarusian industry will focus on newer models (specifically, 3-door and 5-door Opel Corsas) that will be produced in large quantities.”

A framework agreement for the establishment of a Belarusian car assembly plant had already been signed in June 2013 by Deputy Prime Minister Piotr Prokopovich and former GM President and Managing Director for Russia and the CIS James P. Bovenzi. This agreement authorized Belarusian-British joint venture “UNISON” was to produce semi-knocked-down (SKD) or partially pre-assembled vehicles at a plant in Obchak, southeast of Minsk. GM was to provide and install the equipment necessary to carry out final assembly of its cars, produced from kits prepared at European assembly facilities (Eisenach, Germany, for the 3-door model, and Zaragoza, Spain, for the 5-door model), at their Belarus-based plant, while at the same time, they would provide appropriate training of Belarusian workers for production and quality control.

The goal for the plant in its first year of production, 2014, was 4-7,000 passenger cars, with the first vehicles driving off the assembly line in the spring. These vehicles would be available for selling anywhere within the three Customs Union states of Belarus, Russia, and Kazakhstan. Of course, the main market for these vehicles was Russia.

On Apr. 2, though, implementation of the agreements was reviewed at a meeting between Myasnikovich and Andrew Dunstan, who took over from Bovenzi last November after the GM regional leader was promoted to the role of executive director of GM’s global localization strategy. In commemoration of the 70th anniversary of the liberation of Minsk from Nazi occupation, the first GM car was scheduled to come off the UNISON assembly line on July 3. However, that date has come and now is long gone, and there has yet to be a single GM Opel Corsa to reach any Belarusian dealership from Obchak. Of course, Western sanctions and the general decline of the Russian market do not provide the best backdrop for a successful launch of an American automobile assembly line in the Customs Union. 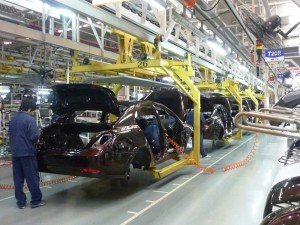 Geely production plant in China. Both Chinese and American plans to enter the Belarusian auto market involved partially pre-assembled kits that would undergo final assembly in country. Photo via Siyuwj via Wikimedia Commons

Meanwhile, a Belarusian-Chinese project to assemble passenger cars under the BelDzhi joint venture has enjoyed a slightly larger amount of success in getting started. Likely, a good part of the reason for BelDzhi’s success is support by top leadership in both countries.

On Sept. 30, Anh Tsunhuey, president of the Geely Holding Group of Hangzhou, China’s fourth largest and traditionally its most scenic city, joined with Prime Minister Myasnikovich in expressing appreciation for the progress made in constructing a new automotive plant for Geely vehicles. Both leaders emphasized the importance of the new plant for both partners in the joint venture. For Belarus, this project is particularly important in that it represents a new page in Chinese investment within the country.

“Earlier, we had mainly economic and trade cooperation, and then we carried out a number of projects with credit support from banks in China,” said Myasnikovich. “This project will build an actual plant for the production of cars. It’s really a new investment phase in our cooperation. We are very pleased that at the political level, both the project and the general direction receive complete support.”

The investment appears to be producing results. In the first eight months of this year, even before the new plant has come close to going online, BelDzhi has produced a total of 5,524 cars, an increase of 1780 percent over the previous year. However, construction on the plant itself is behind schedule.

On Mar. 28, Belarusian Deputy Prime Minister Anatoly Tozik met with Geely Vice President Zhang Lin in China to sign the agreement that broke ground on construction of the plant. As with the GM facility, BelDzhi will produce partially pre-assembled, or SKD, vehicles from its new Belarusian assembly line for the Customs Union market. In its first year, the agreement set a goal of 14,000 cars, but the exact production cycle, if it has been set yet, has not been publicized. When it goes fully online, yearly production is anticipated to reach 60,000 vehicles, while the second phase of plant construction is anticipated to double this annual rate shortly after. In August, BelDzhi head of sales Alex Krichmar projected that the first phase would be complete in 2017, but would not commit to when the second phase would go online.

Realistically, though, the Chinese will likely never get to build its second stage assembly line. Russia is reported to be considering limitations on the delivery of vehicles manufactured on Belarusian assembly lines. A number of news publications are already reporting that the Ministry of Economic Development is already working on a draft resolution to present to the government of the Russian Federation to do just that, entitled, “On the circulation of motor vehicles on the territory of member states of the Customs Union and Common Economic Space subject to the conditions of application of industrial assembly of motor vehicles.”

Before Jan. 1, 2017, the number of passports that may be issued to vehicles are to correspond with “the annually agreed total quota for cars” that was put in place with the signing of the Customs Union treaty. After that, the quota may be negotiated with the Ministry of Industry of the Russian Federation. However, the use of the word “negotiate” can be misleading, as Russia is well-known for foisting its interests on its closest partners. In this case, the interests of Russia are the interests of its automakers.

As a result, the statement made by Belarusian President Alexander Lukashenko on May 9 that Belarus and Russia will settle all disputes relating to the sale of Chinese cars made by Geely at its Belarusian plant within the Russian market may soon be recognized as not corresponding to reality. As demand in the Russian market declines, Russian car manufacturers will naturally resist further reduction of their sales that results from an increased supply of cars manufactured in Belarusian plants. 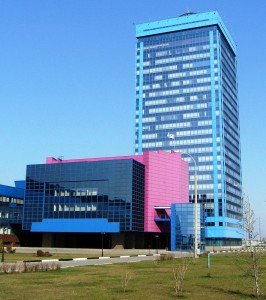 Administrative headquarters for AvtoVAZ in the central Russian city of Tolyatti. Photo by ShinePhanton via Wikimedia Commons

Echoes of war in the automotive market

Rosstat, the Russian state statistics agency, reported that Russian car production in August had decreased by 38.3 percent from the same month in 2013. From July 2013 to August 2014, the decline was more dramatic, reaching 42.1 percent. However, over the first eight months of this year, the year-to-year decline was only 4.6 percent from last year.

From this, the decline in the Russian automobile market can be seen as having pre-dated the international crisis over Ukraine that followed the Winter Olympics in February. The sharpest decline in production took place around August 2013, as a reduction in demand caused a number of plants to “go on vacation.” A good example of this sort of closure was the summer retooling and modernization of the AvtoVAZ and IzhAvto plants in Tolyatti and Izhevsk, respectively. However, the first to feel the breath of the crisis and reduce production, even before August, was actually the cluster of automotive plants in St. Petersburg.

At the start of that autumn, demand for automobiles had not improved, and the Volkswagen plant in Kaluga had to shut down. The Ford plant in Vsevolozhsk and the nearby GM plant in St. Petersburg both slowed production in response to figures showing new auto sales dropping in August by 25.8 percent (a total of some 172,000 vehicles), higher than even the previous two months (June saw a drop of 17.3 percent, while July witnessed a further drop of 22.9 percent).

Over the course of this year, according to the Association of European Businesses, the Russian car market has contracted some 12.1 percent, with sales totaling only 1.58 million vehicles. Looking toward the future, the heads of the largest automotive firms are quite pessimistic about their prospects, with most believing that they will not see a rebound in the Russian auto market until after the war is over in Ukraine. For the rest of the world’s auto producers, the Ukrainian conflict has had no direct impact, but Russian firms are feeling the weight of the resulting economic downturn and sanctions. This is seen as a result of a crisis of confidence felt by Russian businesses and consumers, who are showing their doubts through limited spending in their local market.

“Sales in Russia have fallen 20 percent,” noted President and CEO of the Swedish Volvo company Hakan Samuelsson, “and I think this is a consequence of the crisis in Ukraine.”

Stephen Odell, President of Ford in Europe, concurred. Because of “geopolitical issues and the economic situation,” he projected car sales in Russia to drop to between 2.1 and 2.3 million. No one within the industry is waiting for any favorable news about the Russian economy before the situation in Ukraine is resolved.

Given the resolve of both sides in the fighting in eastern Ukraine, the degradation of the Russian automobile market is expected to continue indefinitely. This means that attempts by new players to enter the Customs Union market are not likely to succeed, in part because of the tendency toward protectionism by the leadership of the Russian Federation. Unfortunately for Belarus, what this comes down to is that new car assembly projects in the country, even if they are carried out by leading automakers, are under current circumstances simply not likely to get off the ground.