The history of the museum originates in 1944.  Vladislava Luzkevich , the poet’s wife, was the first director of the museum. In 1959 the museum moved into a new building at Yanka Kupala Street. Up to the present day it’s located in the park named after the poet since 1972.  It appeared here for a reason.  Yanka Kupala’s house was situated here on the bank of the river Svisloch before it was burnt down in the first days of the Great Patriotic War. 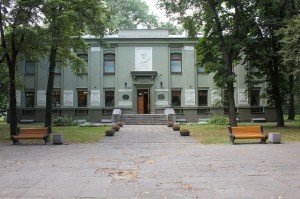 Main enterance of the museum

In the foyer of the museum there is an infobox which contains information about the museum in 3 languages: Belarusian, Russian and English as well as gives you a chance to take a virtual tour to 4 other branches of the museum.

Kupala’s memorial parks Vazynka and Levki, the branch museums Akopy and Levki are captured with panoramic shooting. The device lets you see the rout map to the museums and save the itinerary by copying the QR-code. To keep a memory about your visit to the museum you can receive a diploma with your own photograph as extra service. You can share your impressions about the museum both in traditional and electronic version of a review book.

The new review book was made especially for Yanka Kupala’s 130th anniversary and was named Shlahy ( Ways). It reflects an artistic decision of the 8 exhibition halls on the 2nd floor. 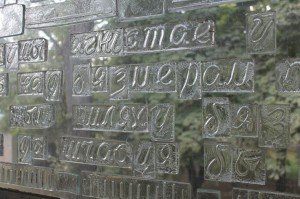 To get there you need to take stairs and through a stained-glass window of glass lines of poetry you will see a poplar and a stone on the site of the fence.

The series of Michael Savitsky ‘s canvasses serve as a kind of a threshold to the exposition. They were created after the poet’s works of literature. In the center there’s a portrait of Yanka Kupala who is the prophet of Belarusian national renaissance of the beginning of the 20th century. 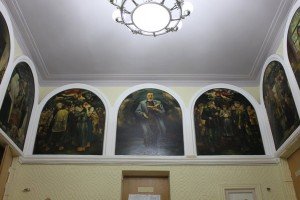 On the first floor you will find all the exhibits, photos, books that are linked to the poet’s birth, family and first creations. A copy of The North-Western Region newspaper  of May 15, 1905 is kept there. Yanka Kupala’s poem Muzhik (Man) in the Belarusian language  was  first published in this newspaper. Kupala was born into a noble family who couldn’t prove their accessory to the noble class. There’s a family tree made by Kupala’s grandfather. Unfortunately Yanka Kupala was the last in his clan and had no children. Satnislav Luzkevich is the poet’s most distant ancestor who starts the family tree in the 17th century. 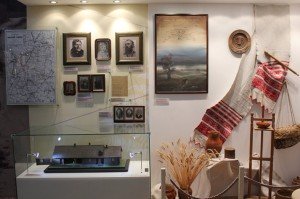 The next hall contains materials about the poet’s life in Vilno. Here the copies of the Nasha Niva newspaper are presented in the showcases. During the First World War, in 19214-1915, Kupala was the editor of the newspaper and in 1915 when the front reached Vilno he decided to close the newspaper. The exposition also has newspapers that were issued with white spots which were a manifestation of military censorship.

–It’s a pity. It was a fine newspaper. It was subscribed to and read practically all over the world, – says the guide Maria Bartkova. – One of the issues has an announcement which says that readers needn’t worry about the subscription as it was accepted in any post office in Europe or the United States. There was no need to write to the editorial office in Vilno but head for any post office and subscribe. I don’t think today any of Belarusian newspapers can boast of such scope. 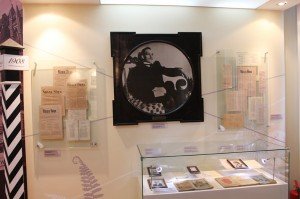 Exposition with copies of Nasha Niva

The popularity of the newspaper is proved by a photograph of Kupala and his colleague reading letters with a pile of other letters on the background. Museum pays special attention to Kupala’s sonnets. There’s a portrait of young Kupala on the wall featuring the night sky. The brightest stars are signed with the surnames of Bogdanovich, Mitskevich, Goethe, Petrarch, Shakespeare and Kupala. This genre of 14 lines with a complicated rhythm is considered to be the best test on poetic skills. Kupala wrote sonnets in the Belarusian and Polish languages.

This collection was dedicated to the philanthropist Alexander Eryomin who sponsored the publication of Yanka Kupala’s third book. Alexander Eryomin was a doctor who invented the formula of anesthesia that is used up to the present day. 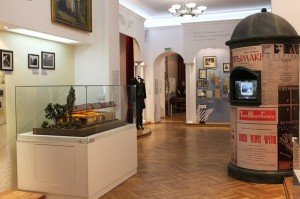 Theatre hall of the museum

Yanka Kupala wasn’t only a poet, but a dramatist as well. He is the author of 4 plays. That’s why in the museum there’s a hall dedicated to theatre. On the walls you can see lines with knots next to which important dates  from the poet’s life are written. For example 1912 is marked as the year when Kupala wrote his “Paulinka”. Kupala was friends with fathers of Belarusian theatre Ignat Buinitsky and Florian Zhdanovich who constantly inspired him to write something for theatre. That’s actually how the first comedy by Yanka Kupala was created. Today the performance based on the famous comedy Paulinka is projected on the improvised stage. The most popular fragment is when sir Bykovsky teaches Paulinka to dance the fashionable in those times padespan. This very play has been the peculiarity of Yanka Kupala theatre since 1944. 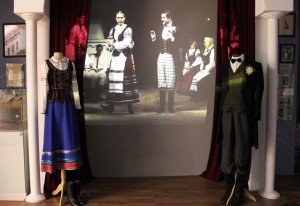 For the first time the exposition features the original layouts for the plays that were used as the scenery. This is the history of Belarusian scenography: Tuteishiya , Raskidanae Gnyazdo, Paulinka.

In the hall dedicated to Minsk and Mink addresses where Kupala lived you can find a model of a one-storeyed house that the poet bought together with his sister. It was home to the poet, his wife, his mother, his sister and her husband and his 5 nephews. Moreover Yanka Kupala often had many guests and then the house didn’t seem that huge. The house was very convenient. It had electricity, canalization and telephone. When the museum was being built on the ashes of Yanka Kupala’s house some of the poet’s personal belongings were found: a teaspoon, a saucer, a demitasse. 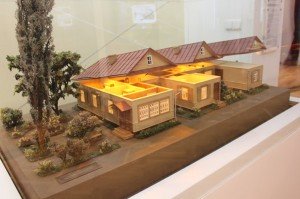 Yanka Kupala is also a political writer. Owing to his writing the process of Belarusian statehood occurred.

Still the author also has children poems in his repertoire. He initially wrote them by some national motives. One of the exhibition halls is devoted to Kupala’s oeuvre for children. The leitmotif of the exhibition is the poem  Hlopchyk y Lyotchyk (The Boy and the Pilot) . Kupala wrote it under the impression of a seven-year-old boy he met in Levky. The boy played pretending he was a pilot and he told the poet it was his dream to become a pilot.

The poem has been translated into different languages and it happened so that this very poem was recited by little Yuri Gagarin on his first day at school. Maybe thanks to this poem he later on managed to fulfill his dream. It’s also known that cosmonauts Pyotr Klimuk and Vladimir Kovalyonok flew into the outer space with Yanka Kupala’s books.

When families or children come they stay in this hall for a long time. Here you will find an interactive game where the pilot’s aim is to collect all the letters of the poem. Besides if you listen to the guide attentively, you can as well answer the questions of the quiz. There is also a platform with a glass floor under which there is a model of the Borovaya  airfield. There also hangs a sling system of a parachute. When a child sits into it wind whistle starts, the engine roars and a projection of the sky appears on the wall. For a minute you can feel like you are floating in the air. 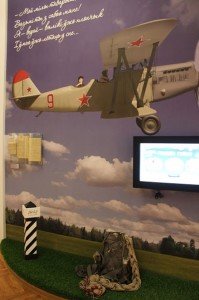 Interactive game and a parachute

According to the guide children and adults are delighted with the attraction.

In the final halls the exposition “Ways” is devoted to the most tragic part of the poet’s life – the repressions of the 30s-40s, an attempt to commit a suicide and death in Moscow hotel. Some things from room 414 in Moscow hotel and the banister of the stairs where Yanka Kupala died were brought into the museum and put together to compose an installation. His last letters to his wife Vladislava as well as her reply that he didn’t manage to receive are also kept there. He you can see the only available official document – a special message about the poet’s death sent to his comrade and written with a mistake in the surname Lutskevich. 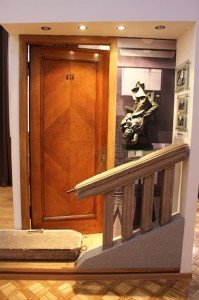 A special corner is  dedicated to the poets wife Vladislava Lutsevich . She was the founder and the first director of the museum. The guide will always note a brown leather briefcase to you:

–From this briefcase the museum started. In 1944 it stored the first artifacts – Yanka Kupala’s manuscripts and documents. His rich written and printed heritage was collected bit by bit in the postwar period by his wife. This activity is still continued by the subordinates of the museum and admirers of the poet’s art with whom the museum collaborates. 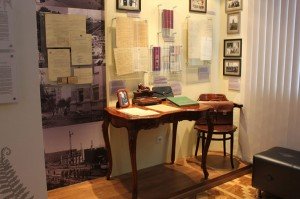 The workers of the museum tried their best to recreate as accurately as possible and to the extent possible the atmosphere in which the poet lived and worked when reconstructing the poet’s office and living-room. 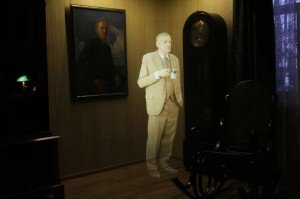 With the help of IT-technologies in the office the guests are welcomed by Yanka’s uncle. You can watch the poet receiving his newly printed book, smelling the scent of the fresh printing ink , drinking tea and  listening to the song of Larisa Alexandrovskaya.