In the second round of the Australian Open, the first Grand Slam of this year, Victoria Azarenka blew out the 8th seed Caroline Wozniacki 6-4, 6-2. Vika won the match in a great way, having scored 31 winners against 18 winners from the Dane. Azarenka played really aggressive and wasn’t afraid of making a fault. She committed 28 unforced errors which didn’t prevent her from making an array of awesome shots.

The Belarusian tennis player showed everyone that with good reason she is two times Australian Open champion. She hasn’t played for a long time due to different injuries, she hasn’t had tournament practice, but now she’s certainly back.

Let us remind that now Azarenka is the 44th in the world, and it’s unusual to see her so far from the WTA top 10, but this match against Wozniacki will surely give her more energy and confidence.

Vika will play her next match in Australia in a day. Her opponent is the 23rd seed Barbra Zahlavova Strycova, a Czech, who in her turn defeated Kai-Chen Chang from Chinese Taipei 6-1, 7-5. 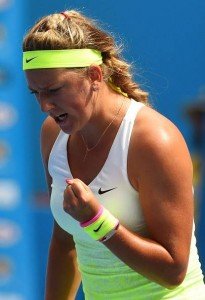