The festival gathered famous Belarusian designers and leading enterprises of the light industry of the country which create their collections on the basis of the national traditions. There were over 12 collections altogether showcased at the stage of National Beauty School. According to the art director of the school Elena Troitskaya, the number of those who wished to participate in the event was even bigger, although it was too complicated to organize the more large-scale show.

One of the inspirers of the show became the duet of designers Alena ‪Morkovko and Natalia ‪Kozhushkova. They prepared not just a simple collection, but a social project.

Spectators saw the collection made in various styles, including ethnoofficial, ethnosport, ethnoclub and school uniform. “Our collection is very adaptive to life, it fits and convenient in wearing and made from the ecological materials,” the collection’s authors said. They set up cooperation with several shops, and as practices show, there is a demand for such outfits. 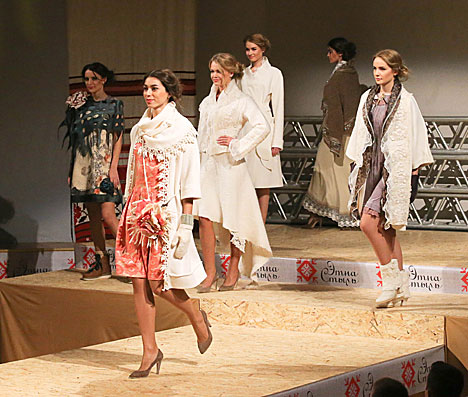 Designer Lina Laveykina noted that she used natural linen fabrics. “Such material is always timely and fashionable. Today people turn back to the natural fabrics. I also used Belarusian ornament, a symbol of family, and handmade embroidery and lace,” she said. 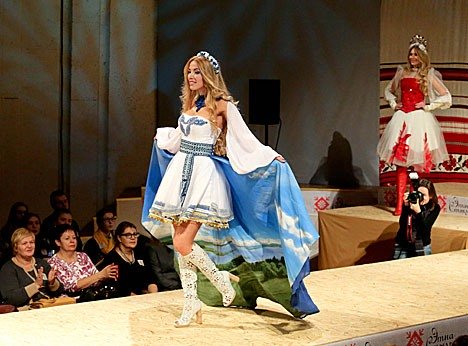 The leading specialist of the handmade artistic weaving department at the “Scarbnitsa” enterprise Lyudmila Podobed noted that Belarusian costume was very diverse. During its 40-year history “Scarbnitsa” has been trusting this. Talking about the differences in the national clothes, the artist said:

“The costume of every region has its own distinct features, and differs with its composition, color and decoration elements. For instance, Vitedsk costume differs from the Gomel one, and Myadel’s – from Malorita and Brest ones. The costumes in southern regions (for example, Gomel) are distinguished with more bright, rich colors – red is closer to orange there, and the western ones (for example, the Grodno one) are always created in cold colors – the abundance of sky blue, turquoise and emerald green.” 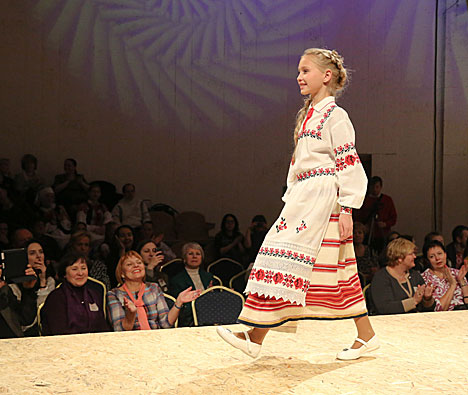 “People believed that a red ornament and an ornament in general defends the human soul from negative impact and evil forces. That’s why the decoration was often placed on the edge of the shirt front, on the hem of the skirt, ankles of the shirt and on the edge of the apron. This is a distinctive feature of a costume of any region,” the leading artist of “Skarbnitsa” enterprise Lyudmila Podobed told.

EthnoStyle fashion festival is planned to be annual and to include different fashion competitions in future. The next showcase will be held in spring.

Text and photo by BELTA